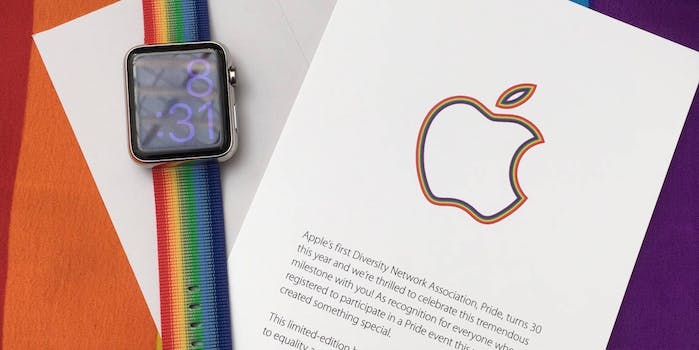 Apple made special #Pride2016 watch bands, but you can’t get one

Since 2014 Apple and its employees have been participating in San Francisco’s Pride events, as part of an effort to showcase the company’s commitment to diversity and equality. This year Apple employees who registered to take part in the company’s Pride events got a special bonus, a limited edition rainbow Apple Watch band.

While Apple didn’t publicly announce the giveaway, a Reddit user, Sakusuhon, posted a picture of the band and the note that came with it. The note read:

Apple’s first Diversity Network Association, Pride, turns 30 this year and we’re thrilled to celebrate this tremendous milestone with you! As recognition for everyone who registers to participate in a Pride event this year we created something special.

This limited-edition band is a symbol of our commitment to equality and we hope you’ll wear it with pride.

CEO Tim Cook joined his employees during the Pride parade, even posting this picture on Twitter Sunday.

Happy Pride to everyone who turned out this weekend to celebrate! #applepride #pride2016 pic.twitter.com/3GZlc9s6bl

…If hearing that the CEO of Apple is gay can help someone struggling to come to terms with who he or she is, or bring comfort to anyone who feels alone, or inspire people to insist on their equality, then it’s worth the trade-off with my own privacy.

As of now the company has announced no plans to release the watch band for sale, though there’s always a chance you could snag one secondhand via eBay or Craigslist.