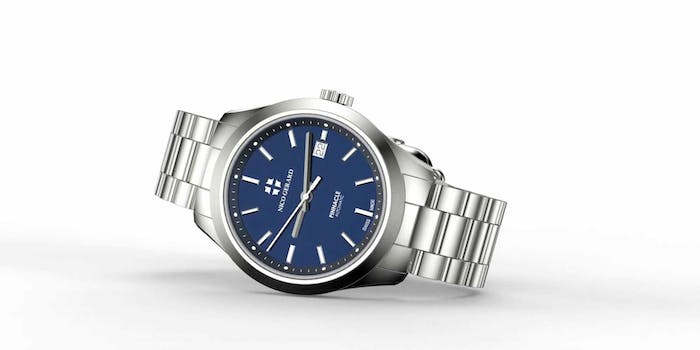 Watchmaker Nico Gerard has a new use for your Apple Watch that just screams “I’m disgustingly rich.” The luxury timepiece manufacturer launched its own high-end watch that uses Apple‘s wearable as a mere clasp.

Nico Gerard’s Pinnacle line of watches sports a specially designed bracelet to attach a 38mm Apple Watch. In effect, it’s a double-sided watch, which could come in handy if you have a hard time reading the luxury watch’s analog face. Not sure what those lines mean? Flip your wrist over and check out the digital display.

Or you could just buy a single watch with a face you can read, because it’s practically impossible to get optimal use out of a watch with two displays.

The basic Pinnacle model retails at $9,300. The Skyview Pinnacle is in the same ballpark, priced at $9,500, but only 99 of those timepieces will be made.

Both of those models are in the ballpark of the higher-end Apple Watch itself, so one could conceivably justify their existence. It’s the Sunrise Pinnacle watch that amps up the excess. Made of 18 karat gold, the unabashedly gaudy device retails for $112,000. Just 88 will be made, which is 88 too many.

This is how Nico Gerard describes the pricey Sunrise watch on its website, presumably without irony:

The tranquil morning dew is cool and the fresh air is still. The dawn of a new day glows red with promise. You feel the warmth of the sun’s rays wrap around you as the sun crests the horizon. The morning beauty fills your heart with joy.

If you can figure out what any of that has to do with a freaking watch, let us know.

Shockingly, Nico Gerard’s Pinnacle line isn’t even the first two-faced watch to feature the Apple gadget. Wood timepiece maker Original Grain has its own watch with room to mount the Apple Watch on board.

If there’s a justification for purchasing one of these wearable wealth indicators, it might be that it comes with an Apple Watch, so you won’t have to purchase it separately. Then again, if you’re considering buying a $100,000 double-faced watch, you probably aren’t worried about rationalizing your decisions. Buy a solid gold jet ski and watch it sink. Who cares? You sure don’t.

Nico Gerard will begin production on the limited-edition models first, and it promises that the Sunrise will be available in six to eight months. The basic model won’t be available until as much as a year from now, which is a long time to really think about the decision you’ve made and come to regret it.