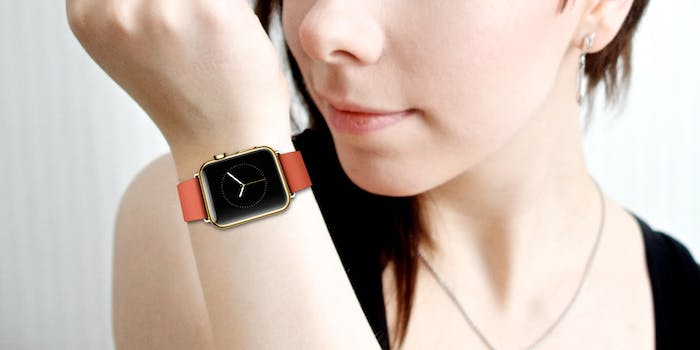 Lefties don’t worry, the Apple Watch will work for you

Why aren't watches made for lefties? Well, for starters, only 10 percent of people are left-handed.

When Apple introduced the Apple Watch earlier this week, it was met with a mixed response. While much about the Apple Watch won’t be revealed before it’s released (like, say, battery power), one of the most popular questions centers on whether the Apple Watch will work for left-handed users.

Why didn’t Apple make a version for lefties, and would they be able to wear the current version comfortably? If you’re left-handed, don’t fret; the Apple Watch will work for you as it can rotate its orientation. But even if it couldn’t, it would follow a long tradition of watches being built for one wrist only.

About 10 percent of people are left-handed. Watches that are built specifically for those who prefer to wear it on their right wrist (lefties) are extremely rare. For over 100 years, watches have been designed with the left wrist in mind, no matter the handedness of the wearer.

The crown (the round knob used to set the time) of a watch is set on the right side, allowing for the time to be set or changed without having to remove the watch. With the Apple Watch and its digital crown—which isn’t a feature on any other current smartwatches and thus not an issue—this is no different.

For the people complaining about Apple not making a version of the Apple Watch for lefties, it isn’t alone. If you want a Rolex designed to wear on your right wrist, it would have to be a custom-built piece, as Rolex—along with the majority of traditional watchmakers—doesn’t make watches for left-handed people.

To make a left-handed version of a mechanical watch that was initially made with the crown on the right can require a significant reengineering of the watch, something that most watchmakers won’t go through for the small segment of the public that may prefer it.

With all that said, Apple has made it as easy as possible for those who prefer to wear the Apple Watch on their right wrist. Upon setup of the Apple Watch, you can choose your orientation, and watch bands can be reversed to fit your right wrist properly.

The only concession that will need to be made is the move of the digital crown from the top right, as it would be on the left wrist, to the bottom left for those who want to wear the Apple Watch on their right wrist. Don’t worry, Apple has both of your wrists covered.