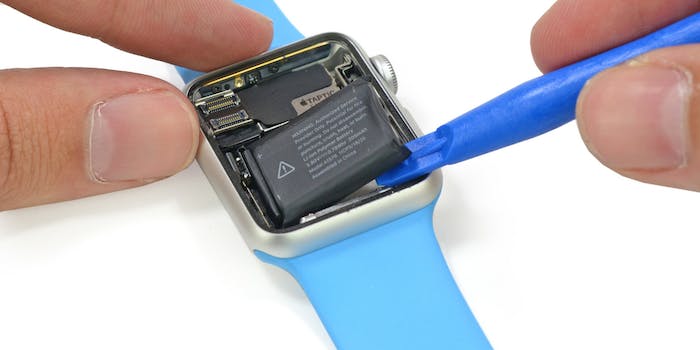 Feast your eyes on the Apple Watch’s electronic innards

The guts of the Apple Watch are finally revealed.

As we’ve come to expect with the launch of any new gadget, the destructive gurus at iFixit have already gotten their hands on a brand new Apple Watch and successfully torn it apart with reckless abandon.

Prepare to feast your eyes on the electronic guts of Apple’s fancy new wearable—if you’re not too squeamish, of course.

As you might imagine, getting inside something small enough to fit on your wrist isn’t easy.

The first issue iFixit’s teardown team discovered was that the only way into the watch was by prying the display right off the top. Once inside, all the goodies that make the watch run were visible, including the pint-sized battery, the vibrating “Taptic Engine,” and of course Apple’s S1 chip, which gives the watch its brains. As it turns out, replacing the display and battery is fairly simple, which should make quick repairs possible if you haven’t totally destroyed the device. On the other hand, replacing any other component is—as iFixit demonstrates—virtually impossible. It’s not entirely surprising that replacing the components of a smartwatch would be uniquely difficult, but what’s surprising is that even the experts of iFixit had issues. The screws, in particular, were a major problem; they’re so tiny that the dismantlers had to modify their own tools in order to access them.

In short, the Apple Watch is a very tiny device with a whole lot of very tiny, very expensive pieces.