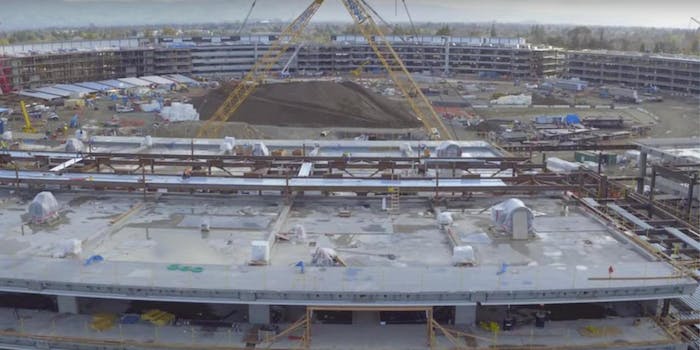 Apple is generally known for its secrecy, but its construction of a new “spaceship” campus in Cupertino, California, has been completely transparent, thanks to a drone pilot who captured footage of the process.

Photographer and YouTuber Duncan Sinfield has frequently visited the company’s new home without stepping foot on its soil thanks to a camera-equipped DJI drone. Flying high over the incomplete site, Sinfield has provided frequent glimpses of different stages of construction.

In his most recent video, workers have made a significant amount of progress. Glass installation has begun inside the curved building, though there’s not much to see through the giant windows at the moment.

The footage also shows the roof segments being lifted into place, as well as preparations for the lid to be placed atop the 1,000-seat underground auditorium. One of the parking structures can be seen with a full, complete solar array on its rooftop.

Sinfield’s previous trips provide a nice time capsule showing how quickly the campus has taken shape. And he’s not the first drone pilot to fly over the facility, either. Older videos from other YouTubers offer views dating to construction’s earliest phases.

Apple is expected to finish building its new headquarters by the end of 2016.