Photo via Marcin Wichary/Flickr (CC BY 2.0)

Apple is recalling over a decade’s worth of its power adapters, and here’s how to get a new one

Apple is issuing a recall on certain models of its wall plug adapter, and the voluntary recall covers just about every version of the product the company has sold in the last decade.

According to Apple, the two-prong AC wall plug adapters that shipped with most Macs and some iOS devices in many countries can break and leave the user at risk of electrical shock if touched. The recall covers devices sold between 2003 and 2015, over a decade’s span of products. 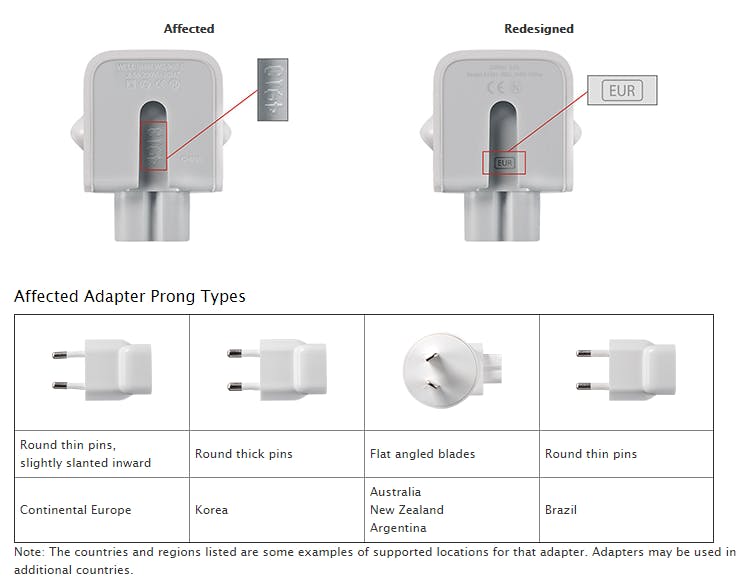 The adapters were sold in Continental Europe, Australia, New Zealand, Korea, Argentina, and Brazil, and also were part of the Apple World Travel Adapter Kit. Those sold in the United States, Canada, China, Hong Kong, Japan, and the United Kingdom are not affected by the problem and aren’t included in the recall program.

Through the recall program, which Apple notes is voluntary, the company is offering owners of the potentially dangerous plugs to swap them for a new, redesigned adapter—one that ideally won’t potentially zap anyone. The exchange program is free of charge to those participating. Apple is also offering refunds to those who bought new adapters due to issues with an affected one.

Those who want to participate in the recall program can identify their plug by checking the slot on the wall plug adapter where it attaches to the Apple power adapter. If it has four or five characters or no characters on the inside slot, it’s part of the recall.

The affected adapters can be taken to the Apple Store or any authorized Apple service providers. Apple’s customer support can also help in the process.