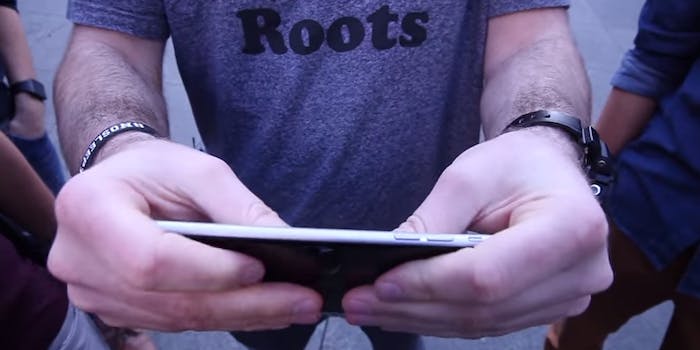 Here’s how Apple is going to avoid another Bendgate

Many Apple fanboys and regular customers were worried about Bendgate following the release of the iPhone 6 release. Android fans had flexibility nightmares of their own when the Samsung Galaxy S6 Edge was released earlier this month. But now, Apple is rumored to be taking significant steps to eliminating pocket-bent phones altogether.

According to a widely shared story by Taiwan’s Economic Daily News, Apple is researching new, stronger materials to use for its next phone.

It’s conventional knowledge that the iPhone 6 bends under 110 pounds of pressure (like in the video above). According to the EDN, Apple is planning to use a 7000 series aluminum—already used in the Apple Watch and in competition bicycles—that is “60 percent stronger” than aluminum.”

Apple pushed back against Bendgate early last year, saying in a statement that only nine phones had been brought to their attention for bending issues. But many iPhone owners have shared their bent devices on social media, causing one YouTube user to create a video called “Here’s what 500 bent iPhone 6 look like”: