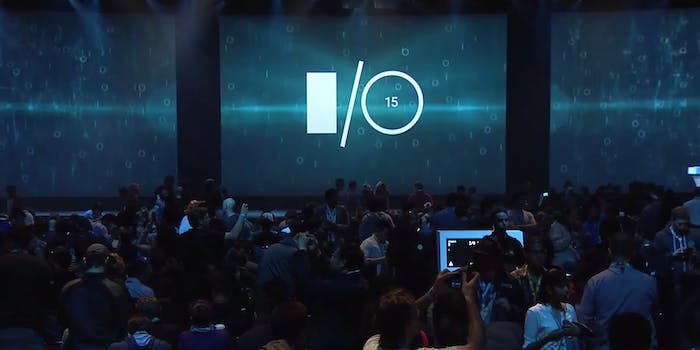 And the crowd goes mild.

Google‘s I/O conference keynote is one of the biggest events of the year for the company, but not everyone in attendance was impressed with the announcements. With applause breaks built into the script, it made for plenty of awkward audience shots—as glowing Apple logos dotting the dark auditorium, every sarcastic round of whoops and clapping grew more cringe-inducing, and it was easy to spot the attendees who would rather be tapping away at their Apple Watches than hear another word from Google.

1) Google announces that all of its key products have at least a billion users.

The woman in the middle is struggling to stay attentive, and the man looking up from his laptop in front is just thankful that WWDC is right around the corner.

2) HBO Now is coming to Chromecast.

The man in front is extremely happy that he can now watch Game of Thrones on his Chromecast, but the woman behind him is definitely checking to see if the cameraman is wearing an Apple Watch or not.

3) Google reveals Brillo, the operating system of The Internet of Things.

The bearded gentleman looks like he wants to pick a fight with the cameraman for a second, but the older man in front is making a list of new Apple TV apps to download when he gets home.

This must have been where they seated most of the Apple fans, because only one person is impressed by Google’s ability to find something on the Internet.

5) YouTube Offline is announced, and the crowd goes mild.

Can you spot the Apple fan? He’s the one who almost falls asleep halfway through his exceedingly sarcastic applause.

With a MacBook in her lap and an Apple Watch displayed prominently, she has seen just about enough from Google, and can barely muster up the enthusiasm for a handful of claps.

But as funny as some of these crowd shots were—and as humorous as it was to see Google expect applause for almost every minor announcement—the only audience moment that truly mattered was when the cameras focused on developer Carlos Pereira and his family.

Pereira created a communication app called Livox that allowed his disabled daughter to communicate in an intuitive and effortless way, and now he’s promoting it for anyone with a communication disability to use around the world.