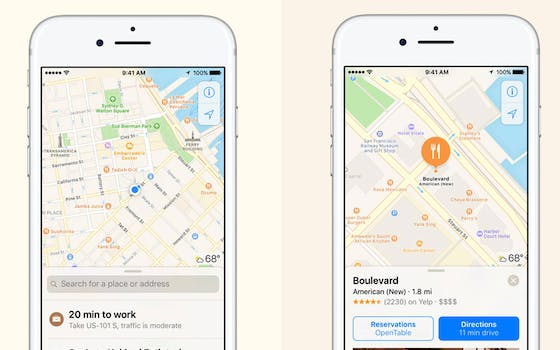 Apple plans to use drones to improve its Maps app

A report suggests Apple's going to use drones to improve its Maps application.

Apple Maps has come a very long way from its error-riddled beginnings. In fact, with iOS 10, the app is downright useful—and looks good, too. Apparently, it’s still playing catchup to competitor Google Maps, but thanks to a recent acquisition and a new plan for capturing aerial data, its Maps app could finally surpass its competitor.

According to Bloomberg, Apple plans for a robotics and data-collection team to use drones to collect aerial map information for Maps. This would let the company update its mapping data more quickly than with the sensor-covered vans it uses to get 3D street view information. (These vans caused a flurry this summer when Apple deployed them around San Francisco and they were mistaken for self-driving cars.)

The drones would monitor for road changes, check for new or changing construction conditions, and get a closer look at street signs. That information could then be rapidly integrated into the app and its turn-by-turn navigation directions.

Apple also recently acquired company named Indoor.io, which conducts indoor mapping. Apple Maps already offers extensive indoor directions for public transit centers (so, if you’re taking the subway in New York, you know which entrance and exit to use to get to most easily get to your destination). Apple could likely use this company’s abilities to help it track other public spaces indoors as well, such as malls, airports, or museums.

It’s unclear if Google currently employs drones for any of its Maps street view or 3D imagery (we reached out for clarification), but Apple’s competitor is using drones for something else: testing drone-based deliveries. We doubt Apple’s going to jump on that any time soon.