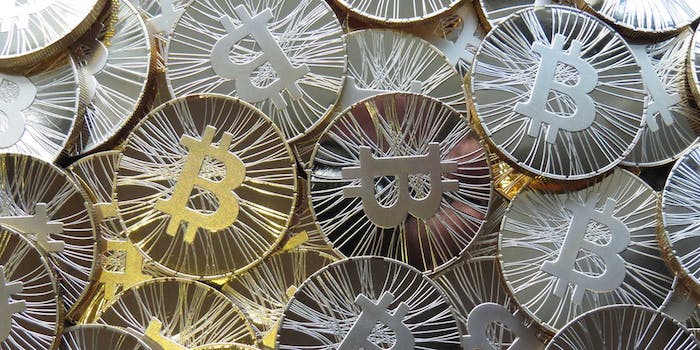 What’s behind Apple’s Bitcoin crackdown in the App Store?

Is Apple about to launch its own, competing payment system?

It’s safe to say that the universe of Bitcoin boosters is not particularly happy with Apple right now. The Cupertino-based tech giant drew the ire of the cryptocurrency community earlier this week when the company dropped the Blockchain app from the App Store.

With Blockchain’s removal, there is no longer a single app designed to allow users to manage their Bitcoin wallets—a decision many claim is an attempt by Apple to prevent Bitcoin from competing with its own payments network.

As cryptocurrency news site Coindesk reports, Apple has previously issued bans on on Bitcoin wallet apps like Coinbase and CoinJar. The company also required the messaging program Gliph to stop allowing users to send bitcoins to each other through the program in order to remain in the App Store.

The Blockchain app had been available through the iPhone App Store for over two years and recorded over 120,000 downloads.

These actions by Apple once again demonstrate the anti-competitive and capricious nature of the App Store policies that are clearly focused on preserving Apple’s monopoly on payments rather than based on any consideration of the needs and desires of their users.

The blog post also linked to a Change.org petition demanding Apple once again allow Bitcoin wallets to be downloaded through the iPhone App Store.

Iterations of the Blockchain app people have already downloaded onto their iPhones will continue to work; however, the app will no longer receive updates and become lost forever if the smartphone is reset.

Google, which is much less restrictive in what products it allows to be sold through its own proprietary mobile marketplace, boasts dozens of wallet applications for Bitcoin and other cryptocurrencies.

While Apple would only tell Wired that that the app was removed for ?an unresolved issue,” Blockchain insists it was given no prior notification about the decision. Apple did not immediately respond to a request for comment; however, thus far, there have been two theories floated as to the reasoning behind the company’s decision.

The first is that Apple was concerned about Bitcoin’s legality. Financial regulators across the globe are still in the process of coming to terms with virtual currencies, so the laws and policies governing them are often in a constant state of flux. A number of countries, such as Russia, have either put tight restrictions on the Bitcoin use or have banned it outright. In a post on the influential Bitcointalk forum, a user reported calling Apple and being told the app was removed due to it being in violation of a guideline requiring that “apps must comply with all legal requirements in any location where they are made available to users. It is the developer’s obligation to understand and conform to all local laws.”

The other theory is that Apple banned Bitcoin apps as a way to promote its own still-in-the-works online payments system. Last year Apple filed a patent for a technology called iMoney, a virtual currency and digital wallet would allow people to store funds in the cloud.

Unsurprisingly, Apple’s moves have sparked outrage among the currency’s fans.

A tweet put out by Bitcoin Foundation General Counsel Patrick Murck implied that the organization, the single most prominent Bitcoin advocacy group in the United States, is at least looking into anti-trust action against Apple.

However, the most extreme case is likely an initiate held by a Reddit user going by the handle u/round-peg, who pledged to buy new Android-enabled Nexus phones for anyone who posted a YouTube video of themselves destroying their iPhones in protest. One video showed someone tossing their iPhone off a cliff and another saw a disgruntled user hack his to pieces with machete.

Some Bitcoin users have pointed to other ways iPhone users can still use their mobile devices to manage their virtual money. One developer is taking advantage of the acrimony aimed at Apple to promote an Indiegogo crowdfunding campaign for Coinpunk, a free browser-based Bitcoin wallet. ?Because Coinpunk is 100% HTML5, it can be used directly from Safari, and Apple can’t ban it,” wrote Coinpunk mastermind Kyle Drake. ?You can run Coinpunk on an iPhone, Android, Desktop, pretty much anything that has a web browser.”

Others have suggested users ?jailbreak” their devices, a relatively simple process that allows iPhone owners to download apps not specifically approved by Apple. Another company has simply offered to buy people’s iPhones and give them bitcoins in return. Not a bad deal, if only the future former iPhone users has a place to store them.