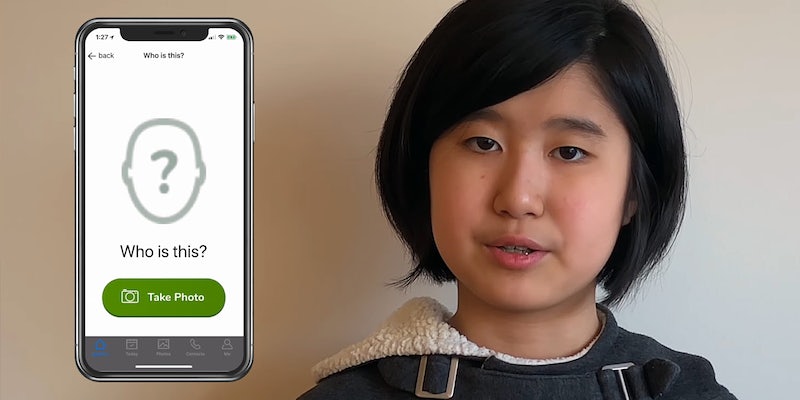 14-year old Emma Yang has seen firsthand the effects Alzheimer’s can have on a family. She’s watched as her grandmother progressed from being simply forgetful to entering the early stages of the disease. Now, she’s trying to do something about it. Yang is working on an app to help Alzheimer’s patients re-learn, remember, and identify loved ones based on photographs.

Timeless, currently raising operating funds on Indiegogo, lets Alzheimer’s patients scroll through images of friends and family. However, it goes beyond simply replacing your phone’s camera roll. The app also uses facial recognition to identify the people in each photo and detail how they’re related to the patient. The patient can also take a photo of someone nearby and attempt to identify them, in the case they’re in the same room with someone they don’t remember. (While not subtle, it at least gives patients the ability to take some control of their situation, rather than relying on others to fill in gaps in their memory.)

“There are no apps on the market that really help Alzheimer’s patients with their daily lives,” Yang told Fast Company. “A lot of times people think that it’s not going to help, or the elderly can’t really use technology, but in fact, if you strategically introduce it to them, it’s actually a possibility and can really benefit their lives.”

One other useful ability in the app: Sometimes an Alzheimer’s sufferer will forget they’ve recently called a loved one, and can end up calling them repeatedly. To prevent this from happening—or try to alert the patient that it is happening—the app will deliver a notification reminding the user that they just called that contact “less than five minutes ago,” for example, and then asks if they still want to make the call.

Yang isn’t developing the app entirely on her own. She’s working with several mentors and has partnered a technology company called Kairos to handle the facial recognition aspect of the app. New technology, including AI, is also being used to help identify Alzheimer’s and other genetic disorders in other apps.

While Yang has a prototype, she hasn’t yet tested out Timeless with Alzheimer’s patients. After raising funds on Indiegogo, that’s one of her next steps. In a growing population of aging individuals with exposure to apps and smartphones—like the titular character in the 2014 film Still Alice—an idea like Yang’s app could feasibly help Alzheimer’s patients, especially those with very early symptoms of the disease.