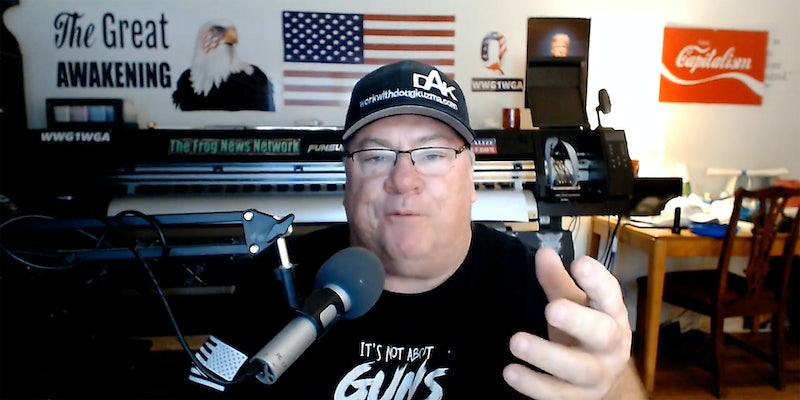 On Thursday, news broke that a far-right anti-vax podcaster had died of COVID-19. In death, he’s being trolled on social media.

Doug Kuzma was a host on the Frog News Network, a far-right outlet sponsored in part by Mike Lindell. There he and other hosts spread disinformation about COVID and the vaccine.

Kuzma often appeared with QAnon slogans in the background on his podcast. He was among those who fell ill after attending the QAnon-friendly ReAwaken America conference in December. Conspiracy theorists baselessly blamed an anthrax attack for the illnesses. According to the Daily Beast, friends of his believe he caught COVID at the conference.

Kuzma also was hesitant to acknowledge that his sickness could be caused by COVID.

“For over 30 years I’ve suffered from bronchitis,” he posted on Facebook on Dec. 14, before conceding, “It does have very similar symptoms as something else we know.”

The next day he complained of additional symptoms but remained optimistic.

Later he said he had a fever and suggested he needed a Z-Pak. A commenter urged him to get tested for COVID.

“I’ll die at the house before I go to the hospital,” he replied.

Kuzma eventually admitted that he had COVID. “I do have, gosh I hate to say it, COVID,” he said on Dec. 21.

On Christmas Eve, Lin Wood wrote on Telegram that Kuzma was in the intensive care unit in the hospital.

“Doug has taken a turn for the worse,” Wood wrote. “His lungs are not responding to treatment.”

Kuzma died on Monday. Commenters on the Herman Cain Award subreddit, which catalogs anti-vaxxers who die from COVID, suggested that Kuzma’s death reveals a divide between people who genuinely oppose vaccines and those who just claim to.

“There seems to be a divide between the TV personalities on Fox who know it’s all a ruse & are secretly vaccinated & the true believers at the radio level,” wrote one.

A number of right-wing radio hosts have died from the virus; meanwhile, Fox News staffers are required to be vaccinated.

News of his death prompted many to dance on Kuzma’s digital grave. Kuzma’s last YouTube video includes comments such as, “Never die on your own supply. Should have gotten the vaccine.”

Kuzma’s Facebook page was flooded with memes and other mockery.

“I’m glad he can’t spread his message to commit suicide by stupidity anymore,” wrote one.

Another said, “He died because of the misinformation he spread.”