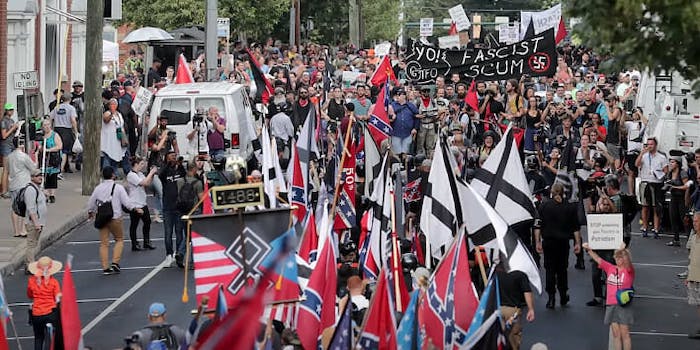 The report is facing criticism for dismissively characterizing violent white supremacist groups and neo-Nazis as 'anti-antifa.'

An intelligence report disseminated to law enforcement agencies across the country is facing criticism for dismissively characterizing violent white supremacist groups and neo-Nazis as “anti-antifa.”

The special research report on political street violence is called Antifa/Anti-antifa: Violence in the Streets and was produced in May 2017 by the Regional Organized Crime Information Center (ROCIC), one of six federally funded Regional Intelligence Sharing System (RISS) Centers across the country.

Transparency non-profit Property of the People acquired the report as part of a FOIA lawsuit it is pursuing against the Department of Homeland Security, as well as several other government agencies. The group published it on Monday.

The report describes antifa as an anti-fascist coalition of “anarchists and communists”—labelling antifa as “terrorists.” The violence and organization of white supremacists, neo-Nazis, white nationalists and “a group called the alt-right” is, by contrast, labelled “anti-antifa” or “rightwing anarchism.”

Some of the source material used in the report includes several hyperpartisan conservative alternative media outlets, like Glenn Beck’s The Blaze and Lifezette, which was founded by Fox News’ Laura Ingraham and is known to have previously pushed conspiracy theories.

Experts reacted negatively to the publication’s fundamental position. One outspoken critic was former FBI agent Michael German—who spent his career embedded in far-right groups and now works at the Brennan Center for Justice.

“Somehow they have this set up almost like antifa is the antagonist, and anti-antifa has developed to resist it,” German told the Guardian. “What it seems to do is completely whitewash the history of white supremacist violence in this country.”

“Far-right groups use these public spectacles as the method to incite violence,” he continued. “And they come knowing that it will attract protest groups from the community.”

Significantly ROCIC facilitates intelligence sharing at federal, state local law enforcement across 14 states, including Virginia, meaning that this particular report was shared across the network just months before the violent Unite the Right rally in Charlottesville on Aug. 12—when a white supremacist murdered 32-year-old Heather Heyer and injured 20 others after ramming his car into a crowd.

Documentation obtained by Property of the People alongside Monday’s report confirmed that one agency that received the report was the Secret Service.

A 1,800 page FOIA haul by MuckRock last year corroborates notions that in the months preceding Charlottesville, Homeland Security-run centers across the country emphasized antifa, and not white supremacists, as instigators and “the greatest threat to public safety.”

The Northern California Regional Intelligence Center, for example, blamed antifa for initiating the altercations in almost every instance. A Homeland Security report published one day before Unite the Right rally even describes antifa as the “principal driver” of violence where white supremacist groups had also been present.

The ROCIC report, funded under the Department of Justice’s Office of Justice Programs, does contain a small print disclaimer that the content “does not necessarily represent the [DOJ’s] official position or policies.”

This, however, doesn’t stop the report’s disputed conclusions being disseminated to law enforcement agencies across the country, where they may have real impact on how police officers decide to mobilize and strategize for incidents like Unite the Right.