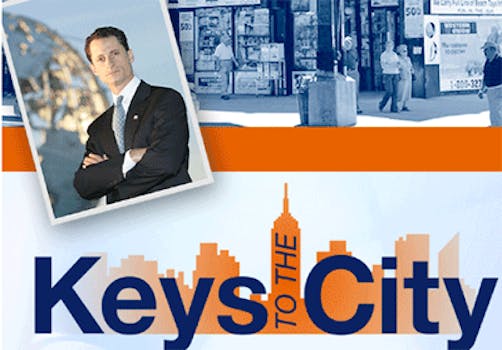 Is that a new logo or is Anthony Weiner happy to see me?

That's the easy joke question many New York City voters were making asking after getting their first glimpse at the former congressman's new campaign logo.

“Is that a skyscraper in your logo or are you just happy to see me?”

That’s the question many New York City voters were asking after getting their first glimpse at former congressman and current mayoral candidate Anthony Weiner’s new campaign logo. The new “Keys to the City” logo features a tan image of a New York City skyscraper that can’t help but remind many of the infamous 2011 sexting scandal that brought an abrupt end to the former Queens representative’s congressional career.