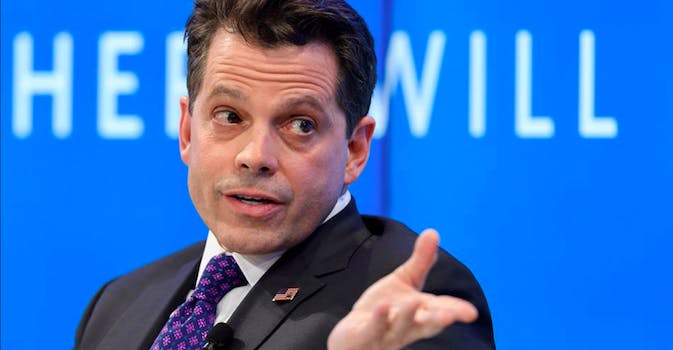 “When you find out who he is, you’re not going to believe it.”

Former White House Communications Director Anthony Scaramucci waved the Q flag on Friday, according to POLITICO. Scaramucci was speaking at the American Priority Conference this weekend when he struck up a conversation with a Virginia couple in QAnon gear.

Scaramucci, apparently unaware that a reporter was nearby, told the couple that Q has “been dead accurate about so many things,” and that, “When you find out who he is, you’re not going to believe it.”

But when the reporter questioned him about the statements afterward, Scaramucci claimed that his comments were meant to refer to Trump’s next chief of staff and should be taken off the record.

It’s worth noting that Scaramucci was banned from the White House earlier this year; the likelihood of him having an inside scoop on staffing decisions is not high.

Scaramucci is just the latest political figure to get caught up in the QAnon firestorm. Last week, Vice President Mike Pence tweeted, and later deleted, a photo of him with a Florida police officer wearing a QAnon patch. And Trump himself hosted a QAnon devotee at the White House earlier this year.

Other speakers at the American Priority Conference included internet provocateurs Laura Loomer, Stefan Molyneaux, as well as George Papadopoulos, the Trump campaign aide who was recently released from prison after lying to the FBI.