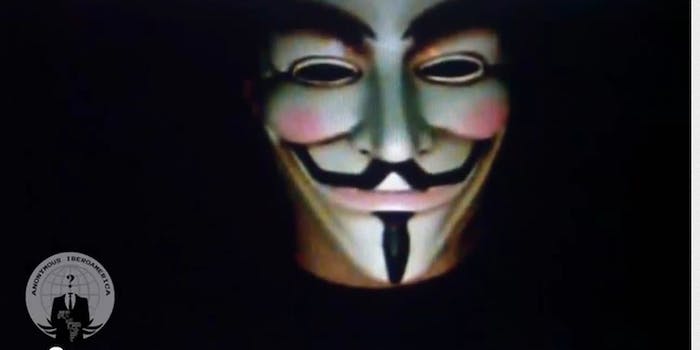 In a new video, set to be released publicly on Sunday, the hacktivists issued a list of requirements for bus companies to meet before the Dec. 10 deadline to prevent action.

A video purportedly from the hacker and activist group Anonymous lays out five demands that Mexican bus companies and government officials must comply with “immediately” to avoid cyber attacks beginning on Dec. 10.

“The government and bus companies have decided to pursue a strategy of silence and order to avoid financial losses and a tarnished image in other countries,” the group stated in a copy of the video provided to the Daily Dot and other media outlets ahead of its public release on Sunday. “But this must end.”

People claiming to be members of the group launched #Opcarreterasseguras (Operation Safe Roads in English) earlier this week to call attention to what they say are thousands of cases of kidnapping and rape occurring on buses in Mexico. The group said that just five percent of Mexicans can afford air travel, meaning most are reliant on buses for long-distance travel in the country.

Here are a few of the demands laid out in the video, which will be released publicly at 6 p.m. on Sunday:

The demands are “not negotiable” and must be met by the Dec. 10 deadline, the group said in the video.

Last month, Anonymous made headlines when it said it would go after the notoriously violent drug cartels that have been waging a decade-long war in Mexico. Anonymous eventually called off that attack, making a widely disputed claim that the Los Zetas drug cartel had released a kidnapped Anonymous member. The group then launched #OpCorrupcion, targeting the Mexican government for corruption that has allowed the drug gangs to flourish.

Earlier this week, a spokesman for Anonymous told the Daily Dot that it had backed off the operation directly targeting the cartels because the group feared it would put the lives of innocent Mexicans at risk.