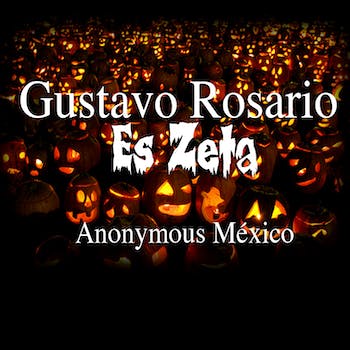 A former government official's website has been hacked to accuse him of ties to Los Zetas, a powerful drug cartel.

Following a threat by the hacker group Anonymous to out public figures with ties to Mexican drug cartels, someone hacked the personal website of Gustavo Rosario Torres, the former attorney general of the Mexican state of Tabasco.

On a backdrop of jack o’ lanterns, the hackers wrote “Gustavo Rosario Es Zeta” and signed it “Anonymous Mexico.” The hack didn’t come with any proof of the claim that Rosario Torres has links to Los Zetas, a hyperviolent drug gang, an assertion that’s also been made on sites like YouTube in the past.

However, on a Facebook page apparently maintained by a Mexican offshoot of Anonymous, the group posted a note disclaiming the attack, which was similar to one carried out on the same website earlier this month. Adding to the confusion, that post has since been deleted.

It was also unclear when the former attorney general’s site had been compromised, with one media report suggesting the attack happened sometime over the weekend, before the planned move by Anonymous.

The followup attack comes as media coverage of Anonymous’s operation, discussed on Twitter with the hashtag #OpCartel, increased.

Despite warnings that publicly linking politicians, journalists, police officers and taxi drivers to the cartels would result in almost certain bloodshed, Anonymous seemed poised to publicize more names of officials it believes are tied to Los Zetas, in an effort to secure the freedom of an Anonymous member reportedly kidnapped by the cartel.

Rather than prompting Anonymous to back off on the threat, it only pushed the hacker collaborative to make good on its ultimatum.

The latest twist in Mexico’s drug war comes on the same day the FBI released a report showing the Mexican cartels have established a wide-reaching network within the United States and have eclipsed the influence of Colombian drug cartels on U.S. soil.

The video reiterated an earlier blog post in which Anonymous said members should only participate in the #OpCartel action if they were certain they could conceal their identity.