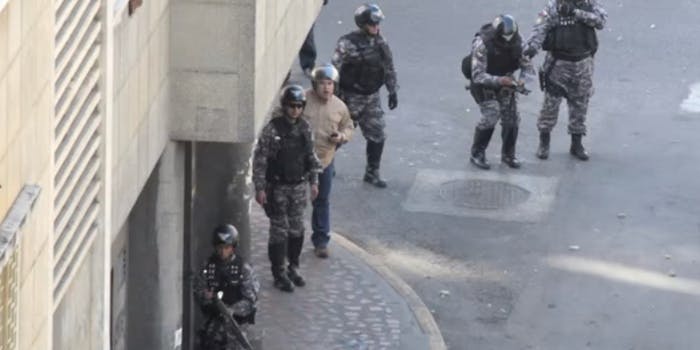 Anons claimed to have attacked more than 80 government sites, many of which had nothing to do with protesters' complaints.

Hackers aligned with Anonymous defaced scores of Venezuelan government websites over the weekend, a retaliation to evidence that police had killed protesters.

According to multiple reports, police shot and killed three civilians Wednesday, each of them part of swelling protests against President Nicolas Maduro, successor to longtime president Hugo Chavez.

The Venezuelan daily Ultimas Noticias compiled user photos and videos into a single video of one conflict, which purportedly led to two of those deaths, and indicates that some of the police forces were plainclothes officers on motorcycles.

In response, Anonymous hackers went on a spree of government website hacks. Prominent among them was the Fundacion Gran Mariscal de Ayacucho, which grants Venezuelans postgraduate scholarships. The hackers revealed hundreds of employees’ phone numbers and personal email addresses at a since-deleted pastebin file, and initially redirected users to photos of bloodied protesters with the caption.

Anonymous Venezuela also took credit for attacking more than 80 sites over the weekend, though many were small potatoes government sites, like the Corporation for Scientific and Technological Development, and the Directorate of Management, Access, and Use of Information Technology.

On top of that, Lulzsec Peru hacked the Twitter account of Maduro’s own United Socialist Party of Venezuela

On Monday, other Anons announced they’d hacked government email accounts, though it wasn’t immediately clear exactly whose they were.

Opposition leader Leopoldo Lopez, wanted by Caracas police, has said he would surrender after one last protest Tuesday.