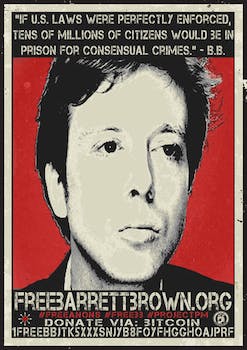 'It is war. On paper, as always, but war,' online activist and Anonymous affiliate Brown wrote from the Texas prison where he is reportedly being held.

InfoSec activist Barrett Brown has been held without charge since he was arrested last week in a dramatic on-camera takedown. Monday night a correspondent of his released a letter from Brown, his first public communication since the arrest.

Brown’s girlfriend confirmed to the Daily Dot via Twitter that the letter is genuine, and was sent to a trusted friend who is apparently the person behind the @FreeBarrett_ Twitter account.

She also said she had received a phone call from Brown, but was unable to phone him at the Mansfield Federal Detention Center in Mansfield, Texas, where he is allegedly in custody after being taken from his Dallas County home. Various Anonymous members are encouraging a letter-writing campaign, to boost awareness and Brown’s morale.

Others, however, are still questioning whether Brown is at Mansfield at all, or whether he has gone underground with the FBI’s assistance. Mansfield is listed as a women’s prison, and although the original prisoner number reported for Brown checks out, he is still listed as “in transit” by the Bureau of Prisons. The slightly different prisoner number Brown apparently gave in his letter does not return any results in a search of prisoners. The @FreeBarrett_ tweeter explains the descrepancy as a transcription error, which still leaves the question of where the first prisoner number came from.

Originally, Brown was reportedly booked into the Lew Sterrett Justice Center in Dallas, but remained there only a few hours before reportedly being moved to Mansfield. In his letter, he complains that the “crushed ribs” he suffered in the arrest were bad enough that other prisoners were concerned about internal bleeding, and that one even volunteered to contact the media on Brown’s behalf, as he thought Brown might be dying. Brown claimed that prison officials denied him medical attention, food, and the Suboxone which he is using for heroin withdrawal, throwing him into involuntary detox without medical supervision.

The poor treatment Brown describes is consistent with Yelp reviews of the Lew Sterrett Center. “The 20 hours I spent in this facility would have to be ranked as the 20 worst hours of my life. It was like something out of a horror movie,” wrote Yelper Michael H.

After recapping his treatment at the hands of various named officers, Brown stepped back to look at the larger picture. When he’s straight, he can be a political polemicist of significant power.

“Note that none of the treatment I received at Lou Sterrit [sic] had anything to do with who I am or what I am accused of, – it is simply the natural result of the inhumane and degenerate mentality found within the Texas “corrections” system, something I first described in a 2005 article for Towards Freedom,” Brown wrote.

“And I note all of this not merely to complain—although to complain is among the few vices I have been left aside from bragging to my fellow inmates – but to illustrate the fundamental problem that so many of us have sacrificed or risked to combat. This problem, which even Richard Nixon recognized and spoke about on that famed evening at the Lincoln Memorial, is that a republic built with the blood of giants has since become a “wild animal.” – one that now feeds upon us all.”

Brown spent much of the letter denying his media-appointed status as “Official Mouthpiece of Anonymous,” singled out some journalists for praise, and settled a few old scores with others he considers foes. The communiqué is packed with specifics, names, publications, who said what about him and who failed to speak out.

He claims that he was midway through a months-long plan to expose FBI informants as a result of the high-profile hack of government-affiliated security firm HBGary, and this is why he was arrested. While he carefully avoids discussing the specific charges he faces, he does trace present events back to actions he took and operations he led or contributed to—in short, to his success as an anti-sec crusader.

“But why was I arrested this time? I would love to tell you. But the prosecution wouldn’t like that. I, and everyone else in the court room, were ordered to refrain from discussing the complaint, affidavits, and warrant, all of which are sealed at the request of the author, one FBI special agent whom I shall not name lest I give him cause for fright (or pretend fright – I am allegedly a danger to one especially skittish special agent whom I shall be careful not to name again until such time as I am prepared to list him in the civil suit I’ve been preparing for weeks now). Frankly, I do not blame this other special agent for requesting that the document be sealed – if I had written something of such low quality and demonstrable untruth, I would burn it and ask forgiveness of every deity invented by man and the higher apes/dolphins/whales.”

Brown goes on to make a request for pro-bono lawyers to contact him, and for mail from regular civilians. He also welcomes hearing from those who would like a collect call from him. “Anyone who writes me without us having been formerly introduced, I will guarantee a response if you send self-addressed stamped envelope. Also I believe that only mail with a return address will be delivered to me, though I’m not sure.”

According to @FreeBarrett_, Brown has started a book club and is playing a lot of chess to pass the time. Apparently, he’s got some time left over for self-examination.

“I hate that I have spent so much time in conflict over the past two years, and that so much of this has involved my fellow American citizens rather than the Middle Eastern dictators that I got involved in this to combat. I feel sorrow at the lost opportunities, and as for the way it has changed me as a person… I like to think that I am wiser and less naïve than I was, but I know too well how foolish and unsophisticated I was to begin with. I cannot excuse the mistakes I myself have made on both the strategic and tactical levels in my short career. I shudder when I look back on some of the things I wrote or said when I got my first real taste of power at the dawn of 2011, and I continue to bring shame upon myself and upon my family and work by some of the things I say even lately. In particular I have made comments about the U.S. military that I do not mean and which are obviously not entirely accurate.

“Along with other nonsense I have said, felt, written throughout my life, many of these things originate from my own fears and weaknesses. I am humiliated at not being able to protect my own mother from the FBI, or to shield my own girlfriend from watching heavily-armed men step on my spine as I scream in pain. I cannot forget how my mom cried on March 6th after the FBI had left with my equipment and hers, and how she whispered through tears that she wanted to be able to protect me from prison but couldn’t; I will never forget the look on Jenna’s face as the federal thugs swept through my efficiency apartment with guns drawn and safeties off, in search of hidden assailants and non-existent weapons. That these things are unjust and increasingly insane does not change the fact that they are the result of my own behavior, my own miscalculations, my own choices.

“Having said that, I regret nothing.”