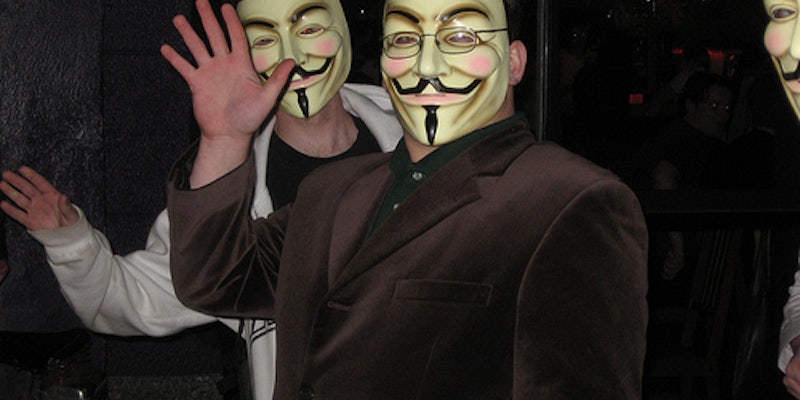 CNN, Fox News, Business Insider and more are reporting that Anonymous has plans to “kill” Facebook on November 5 — also known as Guy Fawkes Day in the UK, a favorite hero of anarchists in the west.

As evidence, media outlets are quoting a July 16 YouTube video titled “Message from Anonymous: Operation Facebook, Nov 5 2011.” It is the sole video on the account of user FacebookOp.

There’s something fishy about the affair. How do we know this account belongs to an Anonymous member and not a garden variety troublemaker? Why the nearly month long gap between the video upload and media coverage? Eric Limer at Geekosystem has served as a whistleblower to the media, noting the dissimilarities between this perceived threat and Anonymous’ usual MO:

“Anonymous, a notoriously talkative bunch, haven’t mentioned anything relating to that particular project despite all the things that have happened in the meantime. And the statement referenced was released on “pirate pad” instead of the iconic, and usual Pastebin,” he wrote (links and italics his own.)

What’s more, @AnonOps, the closest thing the hacker group has to an official Twitter account, is not confirming the attack. Eight hours ago, they tweeted a message to the media:

Five hours ago, the writer backpedaled and said a splinter group of anonymous might be involved. And finally, this statement which suggests that Anonymous has better things to do than pick on a “tool” like Facebook:

“We prefer to face the real power and not to face to the same medias that we use as tools. #OpFacebook #Anonymous.”

Facebook isn’t the only media Anonymous seems to have used as a tool. The blogosphere has readily passed along news about the supposed attack, along with thousands of panicked Reddit, Twitter and Facebook users.

If it were true, they’d be doing an excellent job.