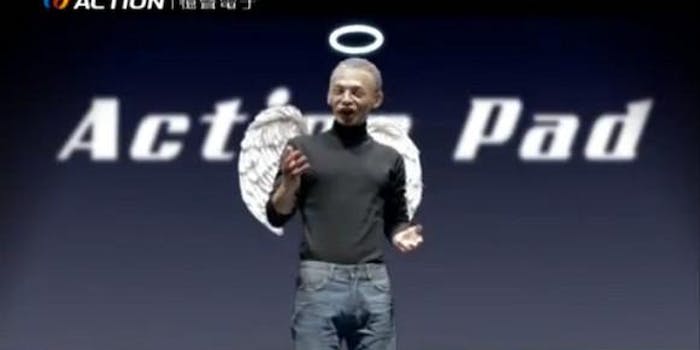 What's worse than ripping off the iPad? Hiring a Taiwanese Steve Jobs impersonator to wear a halo and angel wings to introduce it.

If your company did a simple, cheap video ad and received over 100,000 views on YouTube in the first 48 hours, you might call that a success. If you were the producers of the Android-compatible Action Pad, however, you’d be terribly wrong about that.

With “dislikes” nearly doubling “likes” and race wars breaking out in the comments, the controversy stems from the fact that the commercial is an Apple-style presentation of the new Action Pad, presented by a Taiwanese Steve Jobs impersonator wearing blue jeans, white sneakers, a black mock turtleneck, and—wait for it—a halo and angel wings.

Speaking partly in Chinese and partly in hyperactive English, the actor exhorts:, “Introducing the new generation of the Pad. It’s AMAZING! Pad. What more do we need? Great Language. I think this is it. ACTION PAD! Pad and Lexicorp. One for two is Action Pad! Thank god I can finally play with another Pad.”

Lending a extra-classy touch, his wings flap at the high points of the presentation.

Jobs, like a significant portion of Taiwan, was a Buddhist who didn’t believe in heaven, hell, or angels. If this company’s board of directors is lucky, Jobs was once again right.

If not, heaven help them.