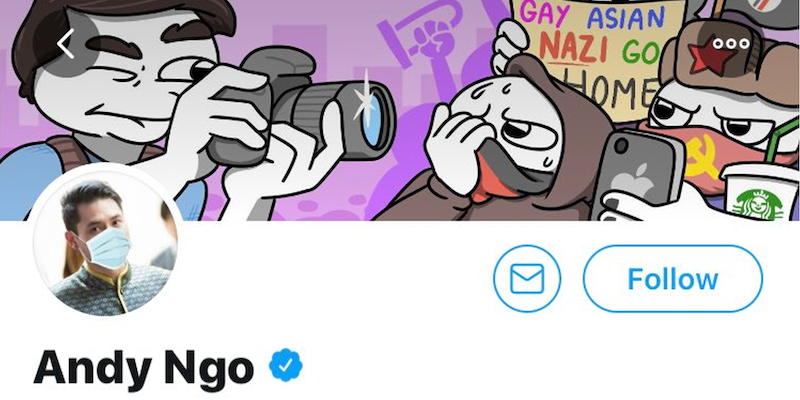 The controversial figure has yet to explain why he removed the image.

The self-described journalist, who gained widespread attention after being attacked while covering a left-wing protest last year, praised the image in a now-deleted tweet.

“More accurate than most mainstream news stories I’ve read on this subject,” Ngo said of the image, which shows himself photographing an array of left-wing activists.

The image was produced by an artist referred to as StoneToss, known best for their comic strips that center around anti-gay themes and Holocaust denial, among other things.

But sometime after the banner was uploaded, the image disappeared. So did Ngo’s praise of the cartoon.

Ngo’s banner has since been replaced by an actual photograph of protesters holding signs critical of his presence at protests.

Ngo has thus far not provided an explanation for why he removed the banner and did not reply to questions from the Daily Dot regarding the incident.

It remains unclear whether Ngo was aware of the artist’s political viewpoints.

StoneToss responded to the uproar on Twitter by arguing that they were not a white nationalist given that the image was in defense of Ngo, an Asian-American.

Some of StoneToss’ other cartoons suggest that certain races are less intelligent due to inferior genetics.

The incident is far from the first time Ngo has faced controversy. The right-wing figure made headlines in January after releasing the location and identity of a minor online.

He also was filmed laughing with members of a right-wing group that was plotting attacks on antifa protesters, lending credence to the argument that he’s not the unbiased observer of events he portrays himself to be.