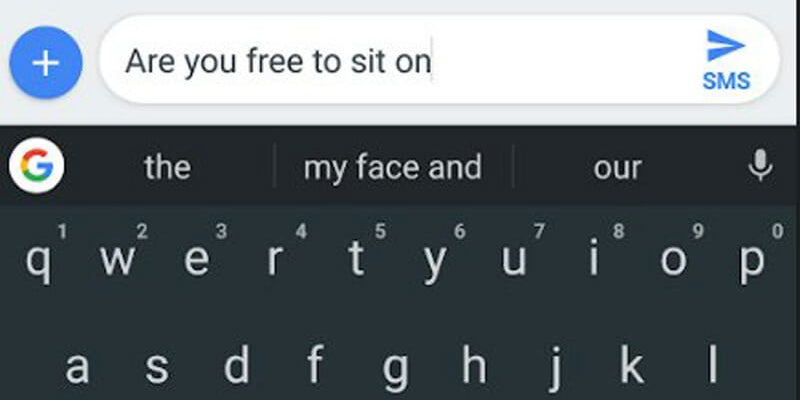 Android autocomplete awkwardly suggests ‘my face’ when you type ‘sit on’

Get your mind out of the gutter, Gboard.

Android users are running into a decidedly NSFW glitch when using the autocomplete feature on Google’s Gboard keyboard. While the Android operating system puritanically bans all references to sex—from “intercourse” and “coitus” to “screwing” and “lovemaking”—some people are finding that when they type “sit” or “sit on,” the phrase “my face” is suggested.

(If, for some reason, anyone doesn’t know what that expression refers to, there are plenty of free online resources to help you figure it out.)

I was SMSing our babysitter with the default Android SMS app; I typed "Hey! Are you free to sit" and autocomplete came up with "on my face." Needless to say, I have never entered that string into my Android device. (This is not a joke)

Google says that the Gboard autocomplete suggestions come from a personalized algorithm based on a specific user’s typing history, but others are obviously able to recreate the glitch on their own. Still, the tech giant is already working on a way to get Gboard’s mind out of the gutter.

“We’ve started rolling out a fix for this prediction behavior in Gboard so that users will no longer see this suggestion,” a Google spokesperson told Buzzfeed. “Gboard is designed to avoid such predictions in its generic models, but human language is complex, and as with any sort of system that filters sensitive phrases, sometimes inappropriate suggestions make it through into the machine learning models.”

The spokesperson added that when Google programmers learn of Gboard making inappropriate suggestions, they work quickly to remove it. Whew, what a relief, because otherwise, that could lead to some sticky situations!

iPhone users, on the other hand, can rest easy, because when tested, iOS devices do not recreate the same glitch. Now if only it will stop insisting that we’re trying to type “ducking” all the time.