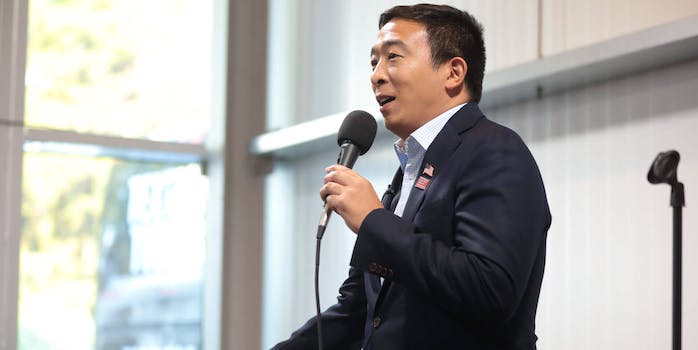 He's running in the wrong primary.

Normally, you would expect this to be yelled in a disaster film. It is also a central tenet of Andrew Yang’s climate plan.

Last month, presidential candidate Yang released a climate plan with a clear theme: fear. This plan is in lockstep with the vision of the future that Yang has been outlining throughout his campaign. It is a vision of a paternalistic future where tech companies work to better the lives of citizens, and the people, who will likely be automated out of a job, are grateful to receive scraps.

Yang’s future is one where our tech overlords will largely become the de facto face of government. Though he is running as a Democrat, Yang offers a bleak vision of the potential future of the Republican Party. While the left-wing of the Democratic Party is running to give the people power in facing upcoming challenges, Yang is running to empower corporations to solve America’s problems.

It’s enough to make you wonder why he is even running as a Democrat at all.

Whether it is his Universal Basic Income (UBI) plan that necessitates cuts to social programs, his housing ideas which boil down to asking people to expect less, or his environmental plan that calls for ceding massive amounts of land to Mother Nature, Yang’s is a politics of hopelessness.

While the average person has to sacrifice in Yang’s apocalyptic future, if you look closely at his policies, you find tax cuts for the wealthy and the preservation of the free market. The tech industry will be rewarded while everyone else sacrifices.

Many liberals are convinced that demographics are destiny. Aging, bigoted, free market, Christian right war hawks will just die out. That might be (though events like the youthful Unite the Right in Charlottesville beg the question), but another insidious strain of conservatism is developing. It is a politics of Silicon Valley technocracy and it appeals to many young people. It is a vision that could lead to a reformed Republican Party that represents Yang, Elon Musk, Peter Thiel, and the worst impulses of online thought.

At first glance, Yang’s environmental plans have some similarities to the Green New Deal as articulated by left-wingers like Sen. Bernie Sanders (I-Vt.) and Rep. Alexandria Ocasio-Cortez (D-N.Y.). Like the Green New Deal, Yang advocates for new emissions standards and infrastructure investment. But there is a stark difference in tone.

“It’s Worse Than You Think” reads the headline on his site. He says, “Our planet is a mess… The West is on fire, the middle of the country is flooded, and the Atlantic is seeing hurricanes of increasing frequency and intensity.”

From there, Yang articulates a vision of hopelessness rather than solidarity, of giving up rather than fighting back.

To date, Republican climate policy has been denialism. But as the realities of climate change become unavoidable, Yang is carving out another possible angle: despairing corporate paternalism.

The most pessimistic aspect of Yang’s proposal is the third of his five major tenets which reads, “Move our people to higher ground. Natural disasters and other effects of climate change are already causing damage and death. We need to adapt our country to this new reality.”

Yang’s climate plan involves “positive use of military expertise.” He would “use our military to project our power abroad by stabilizing areas impacted by climate change, helping countries build or rebuild their infrastructure to be more sustainable, and ease the movements of climate refugees as areas become uninhabitable.”

Here we have another conservative favorite: rather than putting meaningful change in the hands of non-violent government agencies, you expand the purview of military and police forces.

There are also several pie in the sky “Emergency Options” which include “space mirrors” and “stratospheric aerosol scattering.”

Higher ground. Military force. Space mirrors. There is certainly reason to despair about the environment, but on this issue, like many others, Yang uses this sense of hopelessness not as a call to organize, but as an excuse to surrender ourselves to the whims of tech overlords.

Rather than put the onus on the people or the government, Yang puts the implementation of his plans into the hands of future corporations whenever possible. Throughout his proposal, corporations are given tasks like, “document[ing] the externalized costs of their environmental impact.”

Corporations being responsible for their own behaviors has worked pretty poorly in the past, most recently prior to the 2008 financial collapse. And conservatives want to continually empower them.

Yang also outlines “Race to the Top” tax cuts for corporations who solve the country’s problems. The proposal also provides tax cuts to specific industries, including airlines, supermarkets, and companies that agree to invest overseas.

Higher ground for the people. Tax cuts for corporations.

The same kind of doom and gloom Silicon Valley paternalism is alive and well in Yang’s UBI plan. Yang’s idea of UBI, which he calls “The Freedom Dividend” is largely framed as a response to automation, which he believes will impact 1 in 3 Americans within roughly a decade.

The Freedom Dividend requires cuts to Social Security, disability, welfare, and food stamps to work. Essentially, he would take a social safety net meant to protect those in need, and replace it with a blanket system that would dole out $1,000 a month to everyone.

Yang argues that recipients will be able to choose between the dividend and other benefits. However, he also says he would “fund the Freedom Dividend by consolidating some welfare programs and implementing a Value-Added Tax (VAT) of 10%. Current welfare and social program beneficiaries would be given a choice between their current benefits or $1,000 cash unconditionally—most would prefer cash with no restriction.”

Corporate profits will be preserved as the people will see a new sales tax and a further division of a small pie of “entitlements.” Forcing the poor, elderly, and disabled to choose between their pre-existing benefits and the Freedom Dividend makes Yang’s proposal only truly “universal” for those who are already somewhat comfortable

Replacing so-called entitlements with a flat payment has long been a conservative dream. Yang cites among his inspirations for UBI Milton Friedman and Richard Nixon, not prominent liberal economists and leaders. Quite the opposite.

Climate and UBI have been Yang’s biggest issues to date, but a journey through his 169 different policy proposals further shades Yang’s bleak vision of a world.

For housing, Yang suggests that living in shipping containers will be “affordable” and “appealing.” If a giant tech company forces you out of your neighborhood with rising rents, Yang will make sure you get a few bucks to relocate somewhere else. If you don’t fly first class, you might be forced to sit through a live auction of overbooked plane seats.

Instead of making college free, Yang will expand elite institutions a bit, so that the entire ruling class can go to the same schools. He won’t build public housing, but he will ease zoning restrictions to make things easier on developers. And like every good conservative, he promises to cut the size of government so that his friends in tech can pick up the slack.

Even when you look at the issues where Yang seems to agree with progressive thought, there is a conservative tinge to his policies. His Medicare for All plan focuses on “access” to healthcare, an increasingly common right-wing tell. Access means that people will be able to buy any kind of insurance, not that they will be able to afford it. Yang has said he wants to preserve private insurance and notably removed the term “single payer” from his campaign website.

Yang even explicitly defends capitalism as one of his “big three” campaign issues. He calls for “Human Centered Capitalism” on his website. This section is largely filled with vague positivity, but one clear statement of belief that sticks out is, “markets exist to serve our common goals and values.”

Whose common goals and values do markets serve? Though this “Human Centered Capitalism” is presented as a new concept, compassionate conservatism has long been a hobby horse of the Republican Party. The only difference here is that rather than welfare cuts with a smile, it will be accompanied by a positive message on some app.

The issue that most reflects Yang’s ideology is hidden toward the bottom of his “Modernize Military Spending” proposal, where he calls for a “Legion of Builders and Destroyers.” He writes:

“The Legion would be tasked with keeping our country strong by making sure our bridges, roads, power grid, levies, dams, and infrastructure are up-to-date, sound and secure.  It would also be able to clear derelict buildings and structures that cause urban blight in many of our communities and respond to natural disasters… The Commander of the Legion would have the ability to overrule local regulations and ordinances to ensure that projects are started and completed promptly and effectively.”

Who will be the builders and destroyers? His other policies give us enough information to make a good guess. Judging from his other policies, there will be an alliance between tech robber barons and their government handmaidens. If it won’t be fascist in practice, at least it is fascist in theory.

Many have presented Yang’s candidacy as a joke. With issues proposals like “Empowering MMA Fighters” and “The Penny Makes No Cents,” it is tempting to view Yang as a jester. Instead, view him as a trial balloon. Silicon Valley is making a play to rule the future, and Yang is the first test of whether their vision of the future will play with the masses.