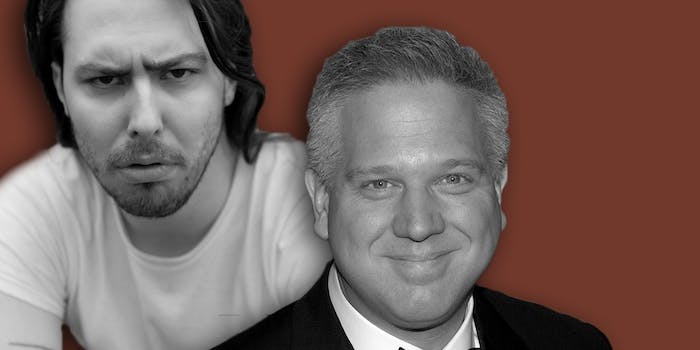 Andrew W.K. got Glenn Beck to admit he was ‘part of the problem’

Enormous underground natural gas reserves? The world’s highest ratio of dogs to companies producing FitBits for dogs? The ability to both publicly despise and simultaneously support such a vast array of Kardashians?

No, America’s greatest natural resource is the power of positive partying produced by Andrew W.K. The rock-star-turned-motivational-speaker-turned-brony-advocate has been preaching the gospel of achieving peace and love through raging your face off for over a decade.

He is a national treasure and, in a perfect world, his shaggy visage will eventually be wickedly grinning from the front of $50 bills. But for now, we’ll just have to settle with him spending his endless positivity on one of American media’s most divisive characters: Glenn Beck.

While the only party right-wing talking head Glenn Beck is typically associated with is of the tea variety, W.K. recently appeared on Beck’s radio show and the results were positively revelatory.

W.K. was on the show to talk about a story he had written that recently went viral. An advice column published in the Village Voice earlier this month, W.K.’s story gave some inspiring advice to a liberal reader who felt his relationship with his ultra-conservative father was being ruined by his dad, ‟who has basically turned into a total asshole intent on ruining our relationship and our planet with his politics.”

Go back and read the opening sentences of your letter. Read them again. Then read the rest of your letter. Then read it again. Try to find a single instance where you referred to your dad as a human being, a person, or a man. There isn’t one. You’ve reduced your father—the person who created you—to a set of beliefs and political views and how it relates to you. And you don’t consider your dad a person of his own standing—he’s just “your dad.” You’ve also reduced yourself to a set of opposing views, and reduced your relationship with him to a fight between the two. The humanity has been reduced to nothingness and all that’s left in its place is an argument that can never really be won. And even if one side did win, it probably wouldn’t satisfy the deeper desire to be in a state of inflamed passionate conflict.

‟The world isn’t being destroyed by Democrats or Republicans, red or blue, liberal or conservative, religious or atheist—the world is being destroyed by one side believing the other side is destroying the world,” he continued in a plea for mutual, unconditional respect. ‟Love your dad because he’s your father, because he made you, because he thinks for himself, and most of all because he is a person.”

Sure, it’s just a twist on the old ‟can’t we all just get along” cliché, but it’s an incredibly moving, beautifully sincere take on it.

When W.K. went on Beck’s show, their conversation focused on the need to start all political discussions from a place of shared appreciation of everyone’s fundamental humanity, while not giving up on your core values in the process.

‟I completely agree,” replied W.K., ‟It’s very easy to get lost in your own passion and to be humbled occasionally doesn’t mean that you’re a weak person. That’s very big lesson that I’m still learning myself.”

They then had a completely civil conversation about the how the abortion debate is colored in shades of grey. This is a thing. That happened.

Granted, Beck has been on an apology kick of late, saying that liberals were right in opposing the invasion of Iraq, and admitting that he said some ‟stupid things” while hosting a show on Fox News. But even so, facilitating this type of conversion, even in a relatively superficial way, is testiment to the positive power of Andrew W.K.

If nothing else, this clip shows that when W.K.’s assignment as an official United States cultural ambassador to Bahrain was nixed at the last minute by the party poopers at the State Department, the U.S. lost out on a major opportunity to spread awesomeness across the globe.