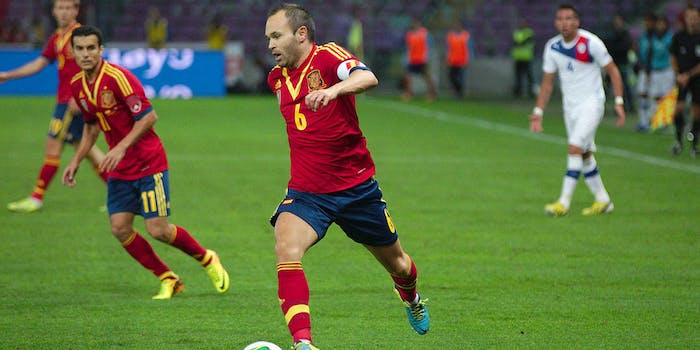 Andrés Iniesta is a well-known soccer player, and a captain on the perennial powerhouse Spanish squad FC Barcelona. Andrés Iniesta is the head of design at Séntisis. They are two different people. The latter was the owner of the Instagram account @ainiesta, until it suddenly fell into the hands of the former without notice.

“I decided to carefully read the Terms of Use and once I made sure I hadn’t done any wrong doings, I proceeded to contact them through their @instagram twitter handle. No response,” Iniesta wrote in a Medium post detailing the strange occurrence.

A few days after being locked out of his account, Iniesta said he started getting messages from friends who were still following his seemingly defunct account. Instead of getting photos of Iniesta’s kids or shots from his vacation, they suddenly found their feeds filled with pictures of the soccer player.

The Barcelona midfielder had suddenly become the main focus of the @ainiesta account. The player’s primary account, @andresiniesta8, has over 5.4 million followers, so it’s hard to make the case that his fans were having trouble finding him. The account @andresiniesta appears to be unclaimed, should either Iniesta decide they want to migrate to that username.

While one might point fingers at the soccer star (or more specifically, his management) for hijacking a regular person’s account, the owner of @ainiesta reported in an update on Medium, “The player agency has contacted me and promised me that they had nothing to do with this problem.”

It’s possible that a fan of the soccer player wound up with the account in his hands and began filling it with content dedicated to the player. Or perhaps the agency representing the player is lying and actually did take control. It’s unclear what exactly happened.

The only people who know for sure what took place are those at Instagram. When prompted for comment, a spokesperson for Instagram told the Daily Dot “We made a mistake here and restored the account as soon as we learnt about it. Our apologies go out to Mr. Iniesta for the trouble we caused him.”

The mystery of what happened may remain unknown, but the story at least has a happy ending: Andrés Iniesta the designer has regained control of the @ainiesta account. According to Iniesta, no additional information was provided to him by Instagram; his account was returned without explanation or apology.

In the great brand reckoning, may we all be so lucky.