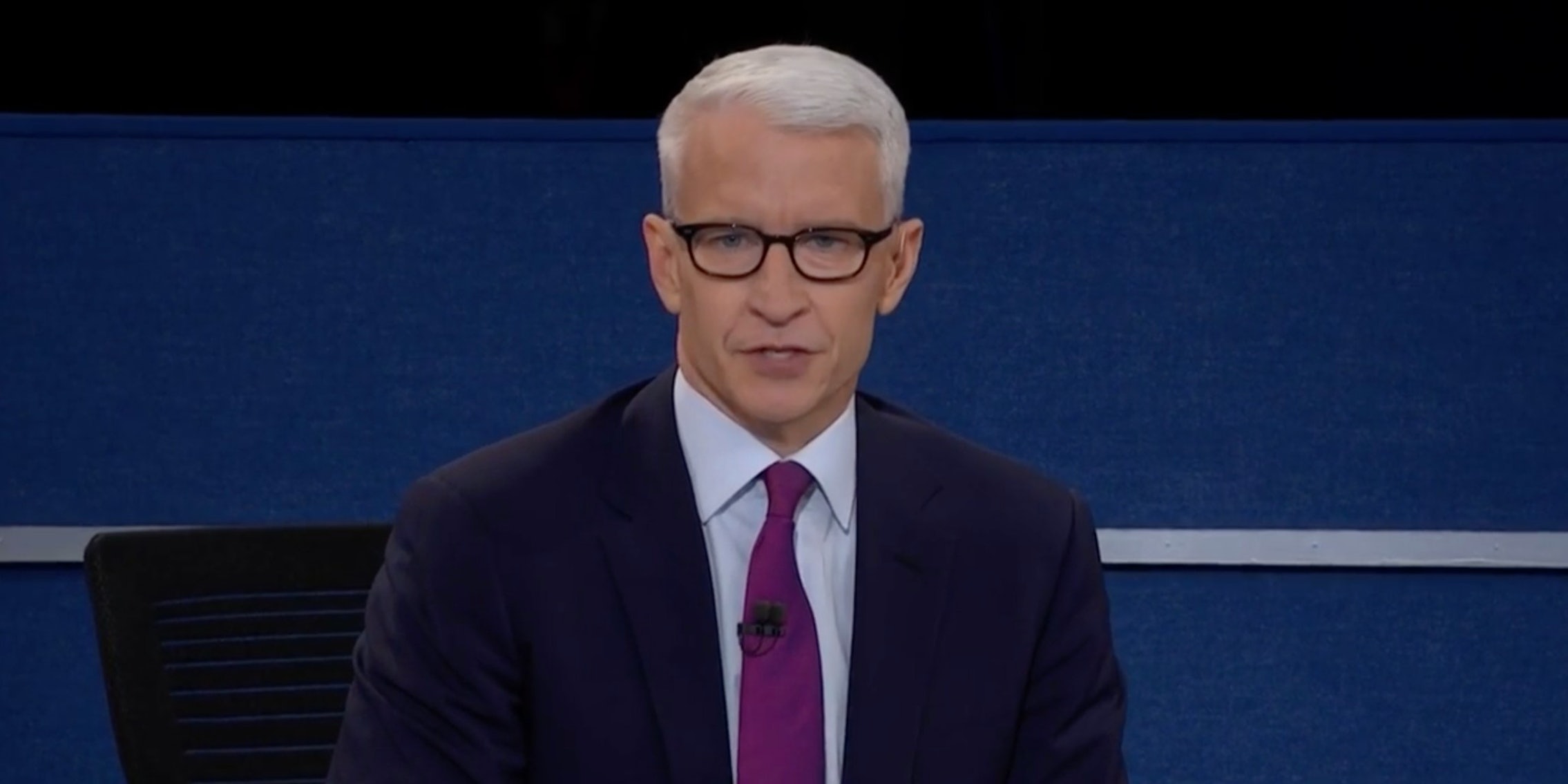 Twitter responded to the hands-on approach in the worst way, calling Cooper a series of homophobic slurs during the debate. Many of the offending tweets, which are extremely graphic and NSFW, are embedded below. There are, however, many more exactly like them.

Anderson Cooper is such an obnoxious homo #debate

Anderson Cooper is such an obnoxious homo #debate

The CNN anchor, who came out publicly in 2012 following years of speculation, became the first openly gay man to host a presidential debate on Sunday night. Prior to the event, Trump criticized the choice of Cooper as a debate moderator, arguing that he was too “biased” to fairly emcee the contest.

You can read this statement in one of two ways.

Before Trump’s Post interview went live, Cooper sat down with the Democratic nominee Hillary Clinton live on CNN. The 49-year-old newsman asked the former First Lady about her recent health scare, which included an attack of pneumonia during an appearance at a Sept. 11 memorial. Clinton, woozy, was seen stumbling to her car. “There’s a lot of folks who are very worried about you,” Cooper asked Clinton of the intense media interest in her health. “How are you feeling?”

By attacking Cooper, Trump was calling out his perceived bias in being empathetic toward his Democratic opponent.

On the other hand, the comment, specifically the aside about his “behavior,” could be viewed as a veiled reference to Cooper’s sexuality. This is often referred to as “dog-whistle” politics, in which politicians use code words to say what they cannot. In 2012, presidential candidate Mitt Romney was asked by the Telegraph why he would make a better ally to the U.K., if elected, than Barack Obama. Romney claimed that it was because of the “shared Anglo-Saxon heritage” between Britain and the Republican nominee.

“To most people, it looks innocuous, if a bit weird,” the New Statesman explained, “but to its target audience — in this case, racists — it reads as a perfectly clear statement that Romney is better than Obama because he is white.”

Ipso facto, Cooper must be biased because he is gay.

Trump repeated his criticism of the CNN anchor’s professionalism on Sunday night. “Why aren’t you bringing up the emails?” he asked Cooper, bristling after being told to stop interrupting the former First Lady. “I’d like to know, Anderson, why aren’t you bringing up the emails?” Trump said, referring to Clinton’s use of a private email server during her tenure as Secretary of State. “I’d like to know.” When Cooper reminded him that the issue had already been raised, Trump claimed that the debate was “one on three,” meaning that the moderators had sided against him.

The moderators, however, asked difficult questions of both candidates  during last night’s debate.

Cooper pressed Trump on recent revelations that the CEO said that you can “do anything” to women when you’re a rich celebrity, including “grab them by the pussy.” “You bragged that you have sexually assaulted women,” Cooper said. “Do you understand that?” Trump called it “locker room talk,” echoing a taped apology that aired Friday night on CNN.

The moderators also grilled Clinton about her aforementioned email scandal, reminding the nominee that FBI Director James Comey called her handling of the situation “extremely careless.” Raddatz also referred to recent transcripts released by WikiLeaks of paid speeches that Clinton gave to the financial sector. She told potential Wall Street donors that politicians often need “public and private positions” on certain issues. “Is it OK for politicians to be two-faced?” Raddatz asked.

Cooper has also been tough on Clinton in the past. During a particularly tense moment in the Democratic primary debates, Cooper questioned her changing policy stances over the years—including Clinton’s shifts on same-sex marriage, immigration, and the Trans-Pacific Partnership. “Will you say anything to get elected?” he asked.

Trump, who has previously referred to Cooper as “pretty pathetic,” has a history of attacking his debate moderators. During the first Republican primary debate, hosted by Fox News, co-host Megyn Kelly brought up his repeated comments about women over the years. “You’ve called women you don’t like fat pigs, dogs, slobs, and disgusting animals,” she said. Following the debate, Trump claimed that Kelly was on her period. “You could see there was blood coming out of her eyes. Blood coming out of her wherever,” he told CNN Tonight. Kelly would be harassed on Twitter for months following his comments.

Trump has yet to make a public statement regarding Sunday’s moderation.

Correction: An earlier version of this article misidentified the Trans-Pacific Partnership. This article has been updated for clarity.