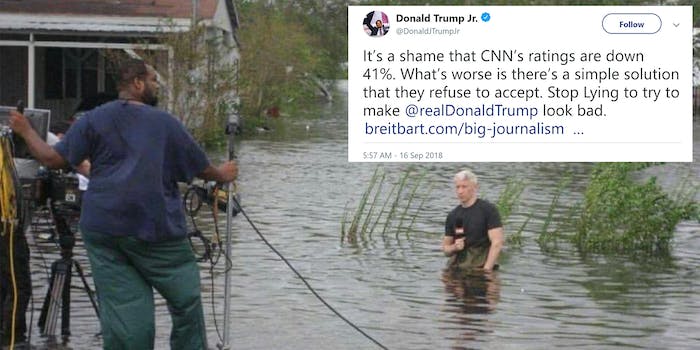 Anderson Cooper fired back at Donald Trump, Jr. on Monday, after the president’s son tweeted a photo of the news anchor standing in waist-deep water, implying that Cooper and CNN were lying about the floodwaters from Hurricane Florence.

“It’s a shame that CNN’s ratings are down 41%. What’s worse is there’s a simple solution that they refuse to accept. Stop Lying to try to make @realDonaldTrump look bad,” the tweet reads, with a link to a Breitbart News article supporting Trump, Jr.’s assertion.

It’s a shame that CNN’s ratings are down 41%. What’s worse is there’s a simple solution that they refuse to accept. Stop Lying to try to make @realDonaldTrump look bad. https://t.co/O3XyWchsJh pic.twitter.com/BCUCxKnOvO

The problem? The photo is actually from 10 years ago, when Cooper was covering Hurricane Ike in Texas.

Cooper responded to the tweet on his show on Monday night, saying,

“I know [Trump, Jr.] considers himself an outdoorsman and pays a lot of money to be led to wildlife in Africa that he then kills. But I’m not sure if he’s actually been to a hurricane or a flood. I didn’t see him down in North Carolina over the last few days helping out, lending a hand, but I’m sure he was doing something important besides just tweeting lies.”

Trump, Jr.’s tweet came on the heels of criticism for the Weather Channel, which aired footage of a reporter struggling against the winds while two passersby walked by calmly.

Cooper also pointed out that the photo was taken widely out of context. The segment was actually demonstrating that flood waters varied widely, so while Cooper’s camera operator was on higher ground, Cooper was demonstrating how deep the water was in some areas.

As the Washington Post pointed out, Lynne Patton, who previously worked for the Trump family as an event planner and is currently an official at the Department of Housing and Urban Development, shared the meme as well. When the meme was contextualized and debunked, Patton posted another version with a shark photoshopped in and the hashtags #NeverClaimedItWasFlorence and #MoreFakeNews.

CNN doing what they do best.
Crying & Lying.@AC360 says I said it was a pic from Florence
Isaid no such thing.

The illusion created by the pic is illustrative of the bs you sell! https://t.co/wnRSns1Thf

Instead of spending 10 minutes (incorrectly) fact checking a meme, maybe @CNN should focus on fact checking their reporting so they don't have another Lanny Davis/Cohen scandal?

PS – I'm still waiting for an apology for the debunked Wikileaks story you wrote about me last year! https://t.co/wnRSns1Thf

Trump, Jr. responded to Cooper’s segment with a tweet claiming that he never said he was referring to Hurricane Florence, and that he was linking to an unrelated article. He also said that he used the photo because it illustrated the “bs you sell!”