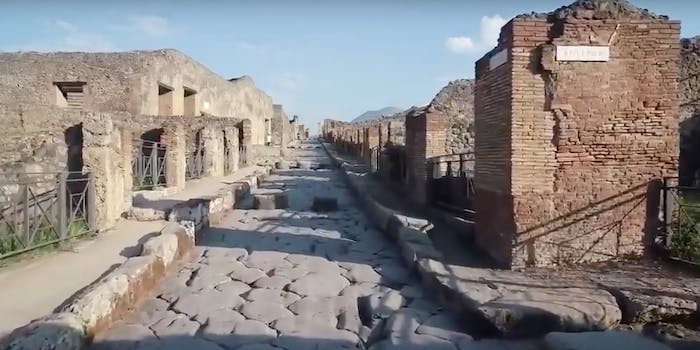 Visiting the ancient Italian metropolis of Pompeii just got a little easier—as long as you don’t mind that trip being virtual. A drone captured some spectacular footage of the ancient Pompeii site, and now you can watch it on YouTube.

Pompeii was a large city near Naples, Italy during the Roman Empire. In 79 AD, nearby Mount Vesuvius erupted, burying the city under tons of ash and pumice. While the sudden volcanic eruption destroyed the city and those living in it, the nature of the catastrophe was such that it exquisitely preserved the ancient site. Pompeii is now a vast archaeological site which offers unique glimpses into what life was like 2000 years ago.

In this drone footage of the ancient Pompeii site, you float over a stone-covered city street bordered by the ruins of houses and buildings. You also see the specter of Vesuvius looming in the distance. The video was posted to YouTube over the weekend and has quickly garnered more than 50,000 views.

In recent years, a handful of archaeological discoveries at the ancient Pompeii site have garnered viral fame. In 2017, a photo of one man’s preserved body surfaced in an unusual pose: it looked like he was pleasuring himself. The image of this so-called “Pompeii Masturbator” went viral, although the true reasoning for his pose was likely due to thermal shock from the extreme heat experienced just before death.

Earlier this year, another image out of Pompeii of a man whose skeleton was crushed by a large rock gained notoriety. The image was excellent meme fodder for Twitter.

And in recent days, archaeologists discovered the well-preserved remains of a wealthy Roman’s home in the ancient city.

As archaeologists continue to excavate the site, we continue to learn more about this ancient Roman civilization—and get new meme-worthy content.