Photo via U.S. Department of Agriculture

As fitting for the convention that nominated the first woman candidate, the female speakers won the day.

Just about everybody who’s anybody in Democratic Party got a chance to address the country at last week’s Democratic National Convention. And while it was Hillary Clinton’s big show, the two biggest crowd-pleasers were both named Obama: the president and his wife Michelle.

At least, that’s how it played for the pundits and regular folks watching from home. Vocativ used analytics technology to determine how the speeches played to the crowds of party bigwigs, journalists, and delegates in the Philadelphia arena. Our data helped quantify audience engagement during the five highest-profile speakers: Michelle Obama, Bernie Sanders, Bill Clinton, Barack Obama, and Hillary Clinton.

Emotions were running highest for Bernie Sanders. The Democratic runner-up’s speech was a celebration of how close his outsider campaign had come to clinching the nomination, but also a good-bye of sorts, since he was on stage to formally celebrate Clinton’s victory. But if his die-hard supporters couldn’t make him win, they at least could cheer. 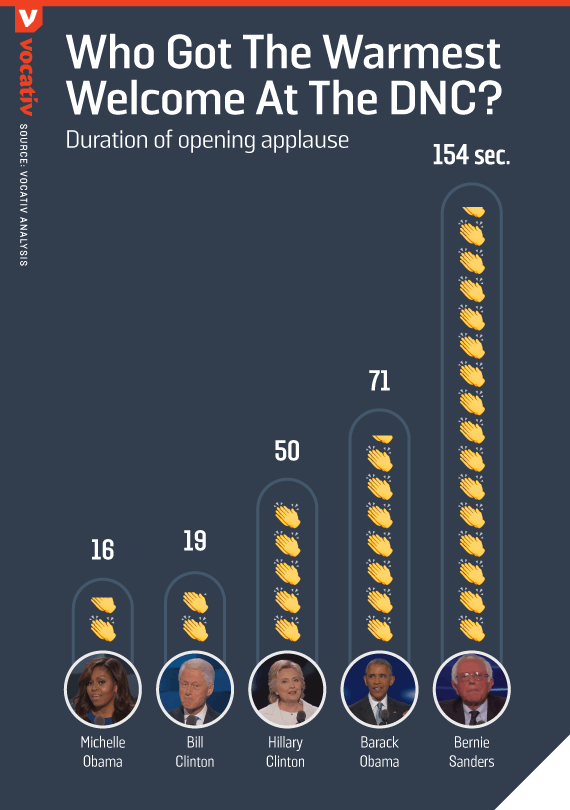 Sanders was cheered for a full 154 seconds before his speech began, which is longer than the interminable opening credit sequence for House of Cards. He was followed by President Obama (who was greeted with 71 seconds of clapping), while the first woman to be nominated for president came in third (51 seconds). Despite the tremendously well-received speech that followed, Michelle Obama came in fifth, getting just 16 seconds of applause, trailing behind Bill’s 19 seconds.

But that’s just the lead-up. If we measure the intensity of the applause before and during the speeches themselves, we see a shift in the story.

Before their speeches, the power signals (applause intensity) were significantly higher for President Obama, Hillary, and Bernie – with Hillary in the lead. In other words, the audience was by far the most excited to see the first woman candidate. 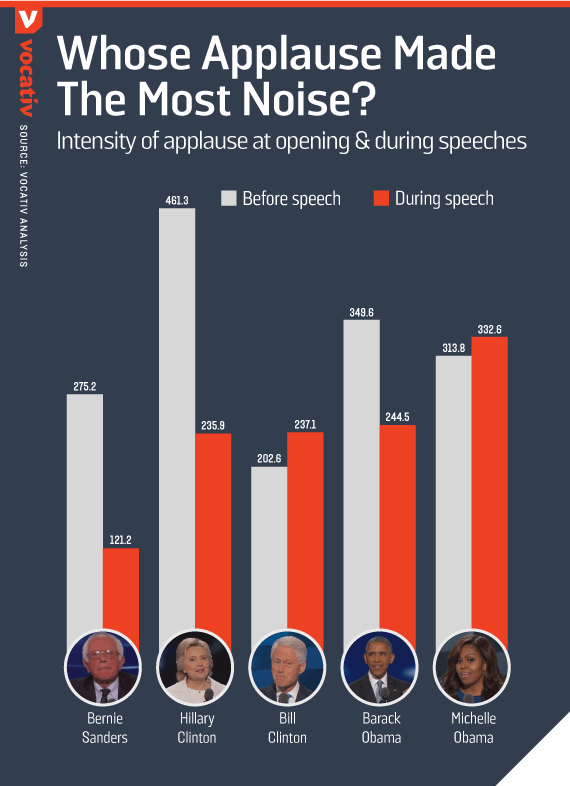 Each speaker had applause lines roughly every 30 seconds, an element of a speech that the writers often build in. Michelle spoke for 14 minutes and the audience erupted into cheers 28 times; Bernie spoke longer—29 minutes—but got 58 rounds of applause, which is nearly exactly the same ratio.

But, when we measure the length of those applause events and the amount of noise they generated, Michelle Obama’s speech still stands head and shoulders above the rest. Minute-by-minute, people applauded her for longer, and more loudly, than anyone else. Hillary was right behind Michelle in the length of these applause events, while the three male speakers lagged behind. 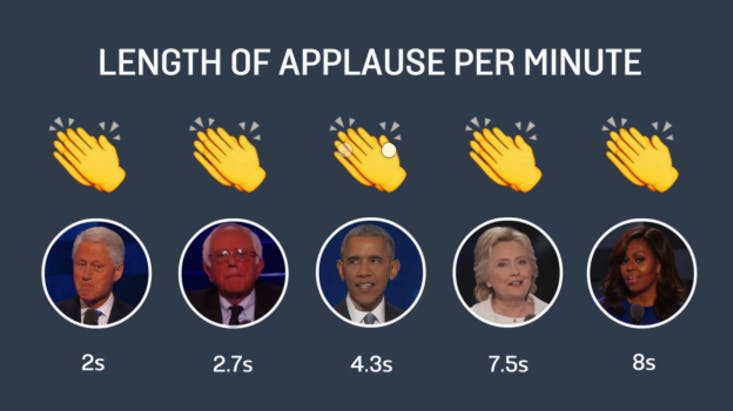 The engagement levels during both women’s speeches and the energetic welcome Hillary received, as measured by the analytics, show the two women won the week. With fellow speakers that include a past president, the current president, and a popular Democratic runner-up, this was no minor feat. At least at the DNC the glass ceiling has been shattered in more ways than one.