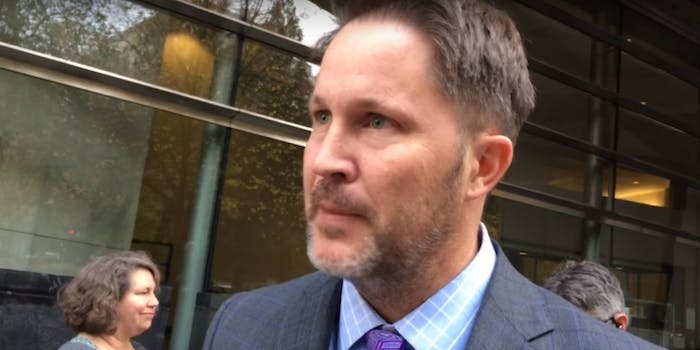 'We must all unite against tyranny.'

Editor’s note: The original version of this story failed to realize that @Ammon_Bundy is a “parody” account. While it is not identified as such on Twitter, @Ammon_Bundy was outed in a January profile in the Washington Post. The account has a history of fooling major media companies, and we failed to do our due diligence for this article. This story has been heavily updated in light of the account’s true nature.

A Twitter parody account of Ammon Bundy is making his thoughts known on the Dakota Access Pipeline. The Oregon militia leader was back on the news on Thursday after being acquitted by a federal jury. Bundy and six others occupied the Malheur National Wildlife Refuge in a 41-day armed standoff that resulted in the fatal shooting of LaVoy Finicum, also part of the Oregon militia.

Sensing his moment to seize the spotlight for a good cause, the parody account took to Twitter on Saturday to issue a “statement” about the First Nations protestors attempting to halt construction of the oil pipeline, which would run from North Dakota to Illinois.

The account, which is not identified as a parody account, as required by Twitter’s terms of service, began by using actual quotes from Bundy the operator found in various news articles. Slowly but surely, the 35-year-old West Texas rancher behind the account started to sprinkle in more outlandish statements. A Jan. 6 tweet compared Bundy to Rosa Parks, and it promptly went viral. Several prominent outlets, including the Washington Post, fell for the hoax.

“One of the things that I was happy about is that I did get people discussing the issue of land rights,” the man behind the account told the Washington Post.

While it’s a parody account, @Ammon_Bundy draws an interesting comparison between the Standing Rock Sioux’s ideology and Bundy’s.

Prior to Bundy’s parody account issuing his “statement,” its tweets were littered with pro-Donald Trump hashtags. He called out Black Lives Matter, referring to its members “thugs.”