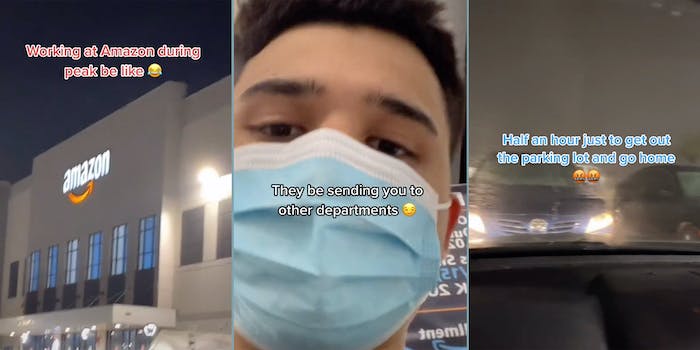 ‘Working at Amazon during Peak be like’: Worker reveals what it’s like working in Amazon warehouse during the holidays in viral TikTok

'During peak you don't have a life... it's all about sleep and work.'

An Amazon warehouse worker outlined the three realities of working during the holidays in a viral TikTok video.

@cash_flacko’s viral TikTok lists annoying aspects of working at the Amazon warehouse during peak shipping season. Captioned “No Kizzy,” the 11-second video got over 662,700 views and 29,400 likes since being posted five days ago.

Text overlays narrate his complaints while the video cuts through scenes of his work day. According to @cash_flacko, when working at Amazon during peak season: There are “Never no parking spaces.”

“They be sending you to other departments,” he continued. “Half an hour just to get out the parking lot and go home.”

Amazon has been criticized for its treatment of warehouse workers. There are even reports of workers not being able to go to the bathroom during a shift.

@cash_flacko is a TikTok creator with over 74,800 followers who usually posts humorous videos of his job working at the Amazon warehouse.

Many of the 466 comments sympathized with his and other workers’ struggle.

“During peak you don’t have a life… it’s all about sleep and work,” @mariafigueroa449 said.

“My thing is they put up balloons and stuff like ‘Happy peak!!!” Mf my ankles could barely last 4 days now I got a 5th,” @spicywhale wrote.

While Amazon does reportedly pay time-and-half for overtime, during peak holiday season, warehouse workers are expected to take on extra days, according to CNN. The intense pace and physicality of working an Amazon warehouse means the additional workload can be extremely strenuous.

The Daily Dot reached out to @cash_flacko and Amazon for comment.