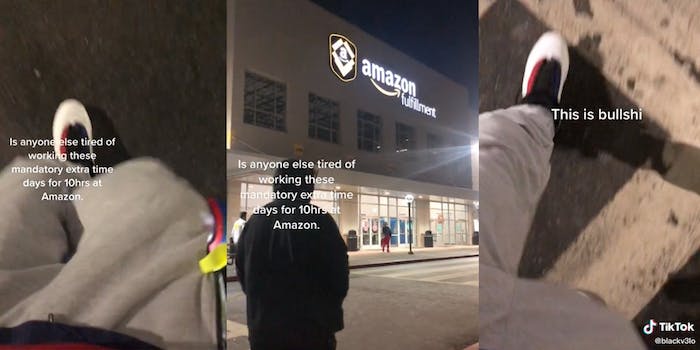 'Is anyone else tired of working these mandatory extra time days for 10hrs at Amazon?'

Amazon is being criticized for allegedly demanding that warehouse employees work extra 10-hour shifts in a viral video on TikTok.

The video, posted to the platform on Wednesday, shows TikTok user @blackv3lo walking into an Amazon fulfillment center while bemoaning his schedule.

“Is anyone else tired of working these mandatory extra time days for 10hrs at Amazon?” the user asks. “This is bullshi[t].”

Full-time Amazon employees can be given mandatory overtime hours, a practice which has reportedly increased across the board due to the ongoing pandemic, and ordered to work up to 60 hours per week.

The footage, viewed more than 32,000 times thus far, was quickly inundated with remarks from other alleged Amazon employees as well as TikTok users facing similar working conditions. The Daily Dot reached out to @blackv3lo via TikTok comment but did not receive a reply.

“Bro yes! But everyone be getting Covid,” one user responded. “So we have to go in for them. Smh.”

Others called on the TikTok user to become a delivery driver for Amazon instead, which would allow him to set his own hours as an independent contractor. Many simply suggested that he quit his job altogether.

But others suggested that 60 hours a week was unimpressive, glorifying even longer and more grueling shifts in other industries.

One user alleged to work anywhere from six 10-hour days per week up to seven 12-hour shifts per week.

The video is similar to countless others in which alleged Amazon employees can be seen criticizing the businesses’ treatment of workers.

Just this week a contractor sued Amazon after accusing the company of constantly rewriting the rules to prevent independent delivery contractors from making a profit.

The TikTok video comes amid a nationwide shift in the younger generations’ attitude towards work as millions ditch the 9-to-5 grind for a better work-life balance.