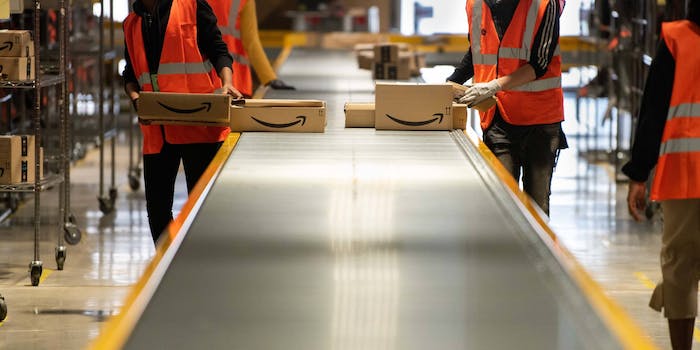 In March a protest was held at the warehouse over Amazon's handling of the coronavirus.

A worker at an Amazon warehouse in New York where a group of workers protested the retail giant’s handling of the coronavirus pandemic has died because of the virus.

The Verge reports that a worker at the JFK8 warehouse in Staten Island, New York died after testing positive for coronavirus. Workers at the warehouse were notified of the death yesterday.

The warehouse in New York was where a group organized a strike in March, with workers criticizing the company’s response to the pandemic. They wanted the warehouse to be sanitized after an employee there tested positive for COVID-19.

After the strike, one of the employees who organized it, Chris Smalls, was fired. Amazon said Smalls was dismissed after receiving warnings for violating social distancing guidelines, but New York Attorney General Letitia James nearly immediately said her office was “considering all legal options.”

Notes from a meeting of Amazon executives discussing Smalls were published by Vice, which showed how they planned to smear him and make him the “face of the entire union/organizing movement.”

The firing of employees who have been critical of Amazon’s response to the pandemic caused Tim Bray, a senior engineer and vice president, to resign from the company and call the decision to fire such employees “chickenshit.” In the blog post outlining his decision to quit, he said firings were “designed to create a climate of fear.”

You can read all of the Verge report here.