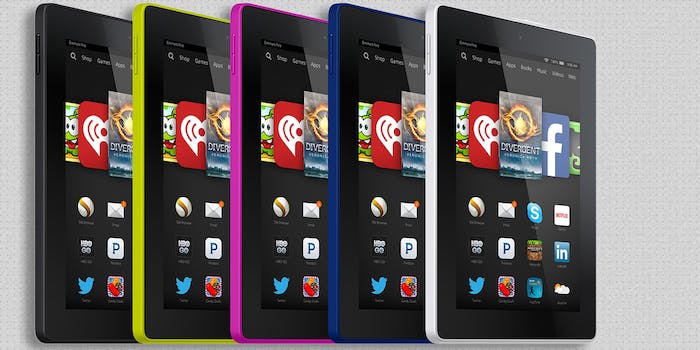 Amazon wants to sell you a tablet. Any tablet. At any size. Please.

“Our mission with Kindle is to make the device disappear, so you can lose yourself in the author’s world,” declared Jeff Bezos, Amazon founder and CEO in a statement. “Kindle Voyage is the next big step in this mission.”

The thinnest Kindle yet at 7.6mm, the Voyage touts a new adaptive front light that will automatically adjust based on the current lighting situation. The front light can be tuned to your specific tastes, and while reading in darker settings, the front light will dim as your eyes adjust to the darkness.

The Kindle Voyage has a new feature called PagePress, which will undoubtedly make its way to the rest of the Kindle ereader lineup quickly. Thanks to sensors on the bezel, the Kindle Voyage can turn the page for you with a slight squeeze of the left or right side of the tablet. A slight vibration will let you know you’ve changed the page.

Currently available for preorder starting at $199, the Kindle Voyage will ship on Oct. 21.

The new Fire HD is the first tablet under $100 that is worth considering. The all-new 6-inch and updated 7-inch version (which is $139, compared to the 6-inch at $99) are vast improvements over the older Fire HD.

With rear and front-facing cameras, a quad-core processor, and five color choices—black, white, cobalt,citron, and magenta—the Fire HD stands to be a viable option for many in search of a cheaper tablet. You can preorder the Fire HD 6 and 7 now, with shipping for the black versions beginning on Oct. 2, and additional colors on Oct. 16.

Amazon’s most powerful tablet, the Fire HDX 8.9, also received an update to better position itself against the iPad Air. The Fire HDX 8.9 features a faster processor and GPU that Amazon says will give 70 percent better graphics performance than last year’s edition.

Family Library is also a feature of Sangria, allowing you to link your account to your partners and share apps, books, movies, games, and Prime Instant Video content on separate devices, without having to log into their account. Sangria—which comes on the new Fire HD 6 and 7—will be available on all third generation Kindle Fire tablets for free via an over-the-air update.

Not to be forgotten, the base Kindle has finally been updated to include a touchscreen display. Retailing for $79, the Kindle now boasts double the storage of its predecessor, and a 20 percent faster processor. The Kindle is now available for preorder, and will ship on Oct. 2.