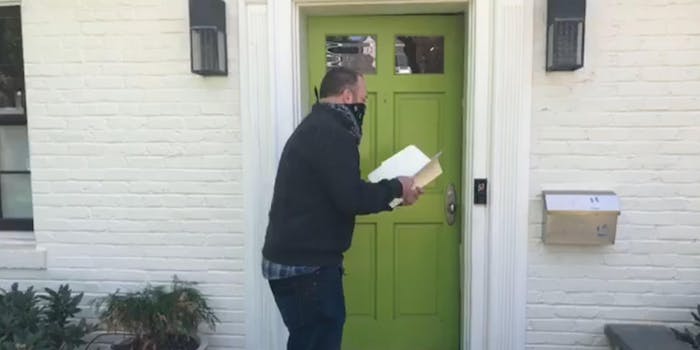 Amazon got rid of a policy allowing warehouse workers to take unlimited unpaid leave during the pandemic.

Groups of Amazon warehouse workers delivered petitions to Jeff Bezos and Jay Carney on Thursday demanding that the retail giant reinstate a policy allowing for unlimited unpaid leave during the coronavirus emergency.

The petitions were signed by thousands of Amazon employees and were delivered to the homes of Bezos, the company’s CEO, and Carney, its senior vice president of global corporate affairs, on Thursday.

In response to the pandemic, Amazon had offered warehouse employees unlimited unpaid time off but announced that the policy would end on May 1.

Amazon tells the Daily Dot that the policy was presented as a temporary measure from its announcement in March.

The policy allowed for workers who were feeling ill—or were close with those who are vulnerable to catching the disease—to not come to work and risk exposing others to the coronavirus.

“We hope that people will continue to support Amazon workers across the country who are demanding unlimited unpaid time off so they can take care of themselves, they can take care of their families, and they can help support taking care of all of us as a community. Because the health of our workers is the health of our communities,” one of those who delivered the petitions to Carney’s house said in a video.

Workers at the Staten Island, New York warehouse organized a strike in March, arguing that the company was not doing enough to ensure their safety during the pandemic. One employee who helped push the strike, Chris Smalls, was fired shortly after it—with the retail giant claiming he violated social distancing rules.

Other employees who were critical of Amazon’s handling of its warehouses during the pandemic were also reportedly fired.

“These individuals were not terminated for talking publicly about working conditions or safety, but rather, for violating—often repeatedly—policies, such as intimidation, physical distancing and more,” an Amazon spokesperson tells the Daily Dot. “We support every employees’ right to criticize or protest their employer’s working conditions, but that does not come with blanket immunity against any and all internal policies.”

Those firings prompted Tim Bray, a senior engineer and vice president at Amazon, to resign. He called the retail giant’s decision “chickenshit” and “designed to create a climate of fear.”