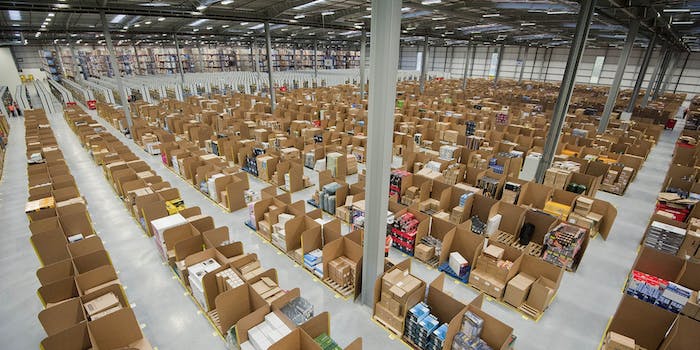 “They say the first step to recovery is admitting you’ve got problems,” writes Amazon Anonymous. “And Amazon has certainly stocked up a few."

The dark side of Amazon’s proposed drone delivery is that employing robots would be a lot less hassle than employing actual human beings. The human beings keep doing unreasonable things like demanding a fair wage and decent working conditions.

Headed up by an organization known as Amazon Anonymous, British Amazon employees are the latest to voice complaints about the way they’re treated at work.

“They say the first step to recovery is admitting you’ve got problems,” writes Amazon Anonymous. “And Amazon has certainly stocked up a few. Our packages are delivered fast – but Amazon’s business practices are not made to order.”

A Change.org petition with over 55,000 signatures was sent to Amazon this week, asking for workers to be paid a living wage: the equivalent of $14.60/hour in London, and $12.22 thoughout the rest of the UK.

At present, Amazon pays British warehouse employees the national minimum wage of £6.31/hour ($10.53), and many workers report harsh conditions where they face being fired if they are home sick for more than three days in a three-month period, are discouraged from unionizing*, and are constantly monitored by the handheld devices they use to locate products inside the warehouses. Similar complaints have been made at Amazon facilities across the world, backed up by reports from undercover investigations.

In the UK, Amazon has also faced public criticism for avoiding corporation tax, to the extent that it received more money in government subsidies than it paid out.

Amazon has yet to officially respond, but if employees continue to work under such difficult conditions, Amazon’s UK warehouses run the risk of provoking the kind of strikes they experienced in Germany during the holiday season last year.

* Correction: This article has been updated with clearer language on the topic of unionization.