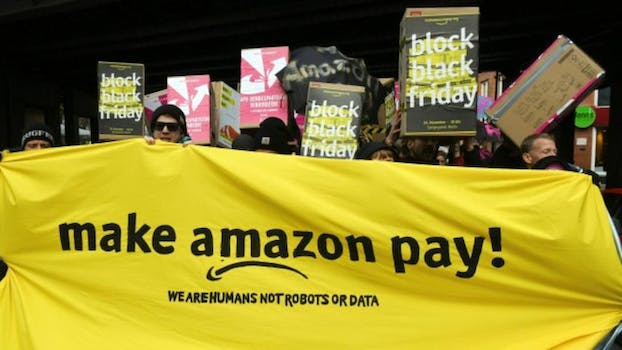 Amazon faces strikes at its distribution centers on Black Friday

Around 3,000 workers will demonstrate to protest low wages.

Amazon is having a terrible time in Europe on one of its most important days of the year.

Workers at half a dozen warehouses in Germany and one in Italy took Black Friday off to protest low wages after Amazon reportedly failed to negotiate bonuses. The employees have also agreed not to work overtime until Dec. 31, after the holiday shopping season.

In Germany, around 2,500 people are on strike at Amazon sites in Bad Hersfelt, Leipzig, Rheinberg, Werne, Graben, and Koblenz, according to Ver.di union spokesman Thomas Voss. More than 500 people at Amazon’s main Piazcenza distributing center in Northern Italy are also conducting a one-day strike to demand “dignified salaries.”

“The workers want to get paid fair wages and they want to be treated decently by their employer,” Ver.di Chairman Frank Bsirske told CNN. “We are not going to let a big American company come here and play Wild West. This is a clash of cultures.”

The union claims workers are paid one third less than others doing similar jobs for German companies because Amazon considers them logistics workers, not retail or mail-order employees. The starting wage for workers is $13.15 an hour plus bonuses. Amazon has 9,000 employees in its German centers and hires an additional 14,000 temporary workers during the holidays.

In Italy, Amazon employs 1,600 permanent staff but brings its numbers up to 4,000 during the shopping season. Workers at the warehouse in Italy are paid an average of 1,300zz euros ($1,541) a month, according to the Financial Times.

“The world’s biggest online retailer wants to achieve record sales on this day, but employees have to produce record performance not only on this day so that everything runs how Amazon wants it,” Ver.di board member Stefanie Nutzenberger told Reuters.

German workers have been striking since 2013 because of what they believe are comparatively low wages. Amazon disagrees. It claims its employees in Germany are among the highest paid in logistics centers. Amazon responded to the Black Friday strikes, calling itself a “fair and responsible employer” that offers “attractive jobs.” It also boasts that it created 2,000 full-time jobs in Italy, a country with relatively high unemployment rates.

“We want a bonus because the company is having great results, and the profits need to be distributed,” Gianluca Zilocchi, secretary of an Italian trade union, told FT. “There’s also a question of rights and a suffocating climate for workers.”

It’s not clear how the strikes will affect customers. Amazon in Italy said it was focused on guaranteeing scheduled deliveries despite being shorthanded. Amazon Germany had its busiest day on Dec. 17 last year, when it processed 2.7 million orders. Amazon told the Financial Times it received more than 1 million orders on Black Friday alone last year.

The strikes in Germany and Italy are expected to end on Saturday.