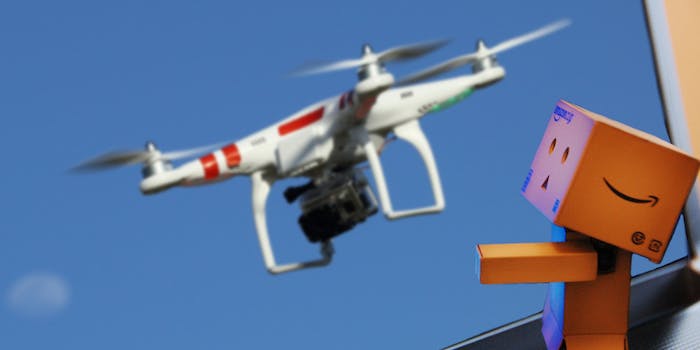 Amazon is tired of traveling to test out its drones.

Amazon wants to test its drones out in areas unnaproved by the FAA, according to a letter sent by the company published on the FAA’s website. The FAA currently has six approved test locations for testing out drones in the United States.

Amazon has been testing out drones for a potential future service the company showed off last year called Amazon Prime Air. With the ability to deliver packages up to five pounds within 10 miles of an Amazon distribution center, Amazon Prime Air could provide deliveries in 30 minutes or less to a large number of customers.

CEO Jeff Bezos noted that 86 percent of packages sold on Amazon are under five pounds during the announcement of Amazon Prime Air on 60 Minutes last fall, which gives amazon a large number of items that can be delivered using the service. Currently, commercial drones have not been regulated by the FAA, and Amazon couldn’t launch Prime Air, which according to the letter is advancing rapidly.

In its letter, Amazon noted that it’s “testing a range of capabilities for our eighth‐ and ninth‐generation aerial vehicles,” and that its request to the FAA for broader testing capabilities “will do nothing more than allow Amazon to do what thousands of hobbyists and manufacturers of model aircraft do every day.”

Amazon isn’t the only company testing delivery drones, with UPS and Fedex working on using drones to deliver packages as well. Commercial drones can currently be tested at the University of Alaska, Texas A&M Corpus Christi, Virginia Tech, North Dakota Department of Commerce, Griffiss International Airport in New York, and the state of Nevada.