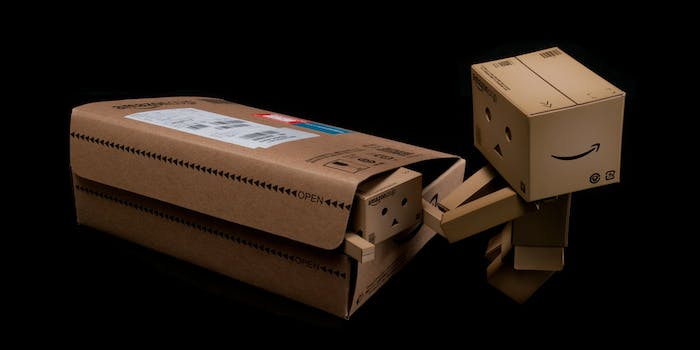 The human cost of getting your next-day Amazon order

Following a New York Times report on the company's brutal culture, some Amazon users are threatening to boycott.

According to a new report from the New York Times, delivering all of those books, sweatshirts, and toilet paper in record time takes a considerable human toll on Amazon employees.

The longread, published on Sunday, describes the company’s callous disregard for former and current employees in excruciating detail, from bad employee reviews after the birth of a stillborn child to a cutthroat corporate culture that thrives on its Hunger Games-like management system.

“Nearly every person I worked with, I saw cry at their desk.”

Amazonians who have worked on Wall Street and at start-ups say the workloads at the new South Lake Union campus can be extreme: marathon conference calls on Easter Sunday and Thanksgiving, criticism from bosses for spotty Internet access on vacation, and hours spent working at home most nights or weekends…

“Amazon is where overachievers go to feel bad about themselves.”

Amazon was already well-known for its aggressive culture, and doesn’t provide many of the college-like perks that you’d find at other tech giants. Amazon CEO Jeff Bezos credits his data-driven management philosophies with Amazon’s rise, but the New York Times reports suggests that its intense pressure and no-nonsense environment might have a lasting negative impact on the company’s workforce.

Sunday’s exposé is not the first time Amazon’s workplace principles have come under fire. Over the years, a number of stories have highlighted the poor working conditions of Amazon’s warehouse employees. Amazon warehouse workers around the globe have described working in 100 degree conditions without air-conditioning, abandoning any semblance of healthy work-life balance, and suffering from health issues caused by manual labor.

It was also revealed in March that Amazon requires even the most temporary hourly-wage workers to sign non-compete clauses that bar them from working at “competing” companies for 18 months.

Amazon denies the allegations brought on by former staffers and published in the Times. In a memo to employees over the weekend, Bezos encourages staff to report behavior like that described in the article directly to human resources.

The article doesn’t describe the Amazon I know or the caring Amazonians I work with every day. But if you know of any stories like those reported, I want you to escalate to HR. You can also email me directly at [email protected] Even if it’s rare or isolated, our tolerance for any such lack of empathy needs to be zero…

I strongly believe that anyone working in a company that really is like the one described in the NYT would be crazy to stay. I know I would leave such a company.

Still, with over 100 sources, the impact of the deeply-reported Times piece has only begun to ripple out. A number of current Amazon employees have spoken in against the story.

Interesting article on the NYT article bashing Amazon. My experience has been a positive one. https://t.co/xoEzZOKx0v

In light of the recent @nytimes article about @amazon, I feel moved to say my time @AmazonDevScot was fantastic and nothing like that piece.

Nick Ciubotariu, head of infrastructure development at Amazon, penned his own takedown of the article, saying it was fabricated and filled with fallacies that don’t represent the current Amazon culture. Notably, his employment at Amazon is relatively recent. A number of the former employees interviewed by the Times worked at Amazon years ago.

I don’t know Ben Olson, and I don’t know when he left the company. If his story is true, his manager, whoever they were, should be ashamed. I’ve been here 18 months, and I’ve never seen anyone cry. And if that was truly the environment in books marketing, Ben should have said something immediately. That’s just wrong, and certainly not something we encourage. In today’s Amazon, management and HR would take care of that in an instant.I can, however, tell you what happens in my group. We work hard, and have fun. We have Nerf wars, almost daily, that often get a bit out of hand. We go out after work. We have “Fun Fridays”. We banter, argue, play video games and Foosball. And we’re vocal about our employee happiness. And that’s encouraged from the Corporate Vice-President I skip to, and the Director I report to.

Another former Amazon employee described the workplace experience in terms of the bathroom environment—people work very hard at Amazon, taking their laptops into the toilet to code. The anonymous former employee described in Vice:

The worst floors were the ones dominated by engineers. I regularly saw people bring their laptops into the bathroom, where they would sit on the toilet and write code. (I’ve never seen anyone clean their laptop after leaving the bathroom.) Engineers would talk to each other through stalls. On many occasions, I heard people take phone calls while mid-business. It was hard to tell if someone was groaning because it was difficult to code or difficult to poop. Another Amazon colleague once joked that this gave new meaning to the word “deploy.”

Despite this depiction of the company’s bathroom culture, this person said, overall, he’d had a good experience at the company.

Other people agree with the Times depiction.

My buddy worked at @amazon & I can attest to her sending 3 am emails, working weekends. Not the best environment. https://t.co/VmL44FSXCC

Beyond eliciting responses from tech insiders and Amazon employees, some Amazon customers appear to be canceling their accounts until the company proves it treats workers fairly.

Why I’m finally going to boycott @Amazon: a company that doesn’t respect its own workers doesn’t deserve my money.http://t.co/IloUat9gah

@NewellLondon @nytimes I just got rid of mine yesterday. They don't need my money anymore. The old Amazon is long gone.

Starting to question my @Amazon account after this report on their work environment, or as they say "company culture" http://t.co/carZeMtVzh

http://t.co/EuWHnnIpe3 Jeff Bezos better be doing some damage control on his #companyculture. Makes me think about my next @amazon order.

@nytimes Thank you for this article, I am cancelling my @AmazonPrime membership and won't be doing business with @amazon again. #workplace

Amazon stresses putting the customer above all else. Now, those customers must decide whether or not the human cost of Amazon’s corporate culture is worth saving time and money on a bar of soap.