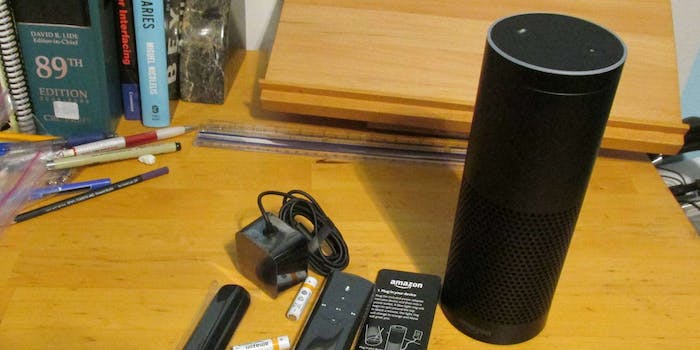 Amazon Echo, home alone with NPR on, got confused and hijacked a thermostat

Alexa is a big 'This American Life' fan.

The Amazon Echo is always listening—and not just to you. According to a report from NPR, their radio broadcast about Amazon’s device triggered actual devices in people’s homes.

Earlier this month, the “Listen Up” segment on NPR’s Weekend Edition discussed the Amazon Echo and the retail giant’s voice-controlled assistant Alexa. The story focused on how the device has helped users take control of their home with Internet-connected devices.

As it turns out, the Echo doesn’t just let owners control their homes—it takes orders from voices on the radio, too. According to a followup report from NPR host Rachel Martin, the initial story on the Echo caused a couple of the eavesdropping devices to perform commands given on-air.

One listener claimed that the broadcast caused Alexa to reset the thermostat in his home to 70 degrees. Another said that Alexa began playing an NPR News summary after hearing mention of the station named on a radio nearby.

Alexa has become a prominent part of the Amazon ecosystem, and the retail giant has started integrating the voice assistant into just about every product it makes. The Amazon Fire TV was refreshed last year to add support for Alexa, while new additions to the Echo line also prominently feature the A.I.

The NPR incident isn’t the first time Alexa has been tricked into taking commands from an unfamiliar source—users have reported the device reacting to Echo commercials on TV as well.

And Alexa isn’t the only voice assistant to fall victim to accidental hijackings, either. In 2014, Xbox One owners reported that a commercial featuring actor Aaron Paul giving commands to the console prompted Xboxes in people’s homes to turn on.

What can be done about Alexa’s overeagerness? Amazon is working on fixing the issue, but NPR spotted an opportunity. Martin ended the update with one more attempt to take control of any Echo devices listening in. “So Alexa, listen up—we want you to pledge to your local member station. You hear me? Lots and lots of money. Did you get that, Alexa?”