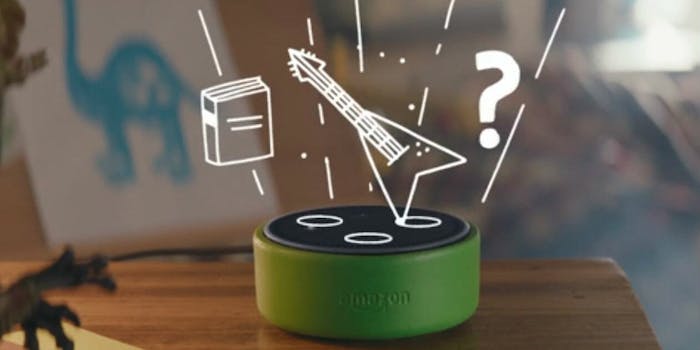 Amazon Alexa will now reward kids for being polite

Kids are being rude to Alexa, so the digital assistant is going to teach them a lesson.

Released alongside a new kids edition of the Echo Dot speaker, a kid-friendly software feature called “Magic Word” rewards children who say “please” before giving a command. It is supposedly a response to worried parents who fear the poor behavior their children exhibit toward inanimate objects will carry over to when they’re speaking to actual humans.

Before, when children yelled at the voice on the other end of the speaker, they wouldn’t be corrected. Now, the speaker offers positive reinforcement when a child says certain phrases like “please” and “thank you.”

For example, when a kid asks whether their favorite soccer team is winning, Alexa will answer and then add “Thank you for asking so politely.” The smart speaker will take on a parenting role, no longer disregarding children who bark demands while implicitly telling them that sort of behavior is acceptable.

The Magic Word feature is bundled in a service called FreeTime that lets parents curate content for their children. There’s a premium subscription for $2.99 a month with loads of child-appropriate content, including videos, TV shows, and books. FreeTime will be made available on May 9 on all Echo products without a screen, including the Echo, Echo Plus, Echo Dot, and Echo Dot Kids Edition, which was announced today alongside the software.

Starting at $80, the new product is a repackaged Dot with a rubber case, a year of FreeTime Unlimited, and a two-year warranty covering any damage to the device. It’s meant for children between the ages of 5 and 12.

Much like Facebook’s controversial Messenger Kids, the new products aimed at children will likely be criticized for attempting to indoctrinate kids into Amazon’s ecosystem. While that is almost certainly the case, there are some useful features for parents who find it necessary for their child to have a smart speaker.

For example, FreeTime will set time limits for when children can use the speaker, so they don’t stay up all night talking to their robot friend. If a child is bored, they can ask the speaker to tell a joke, and it will respond with something age appropriate. On top of these additions are a load of parental controls for blocking explicit music and reviewing voice recordings.

Let’s hope the additions encourage kids to speak with manners—and get Alexa’s mind out of the gutter, too (link is NSFW).

Update 5:39pm CT, April 25: This article has been updated for clarity.