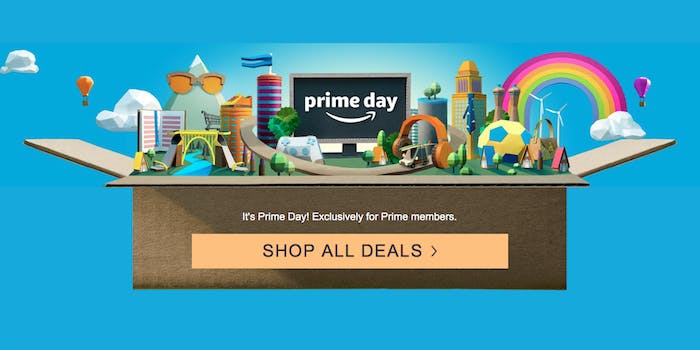 Did you survive the great Amazon Prime Day outage of 2018?

Amazon experiences technical difficulties on its biggest shopping day of the year.

Just as its Amazon Prime Day festivities were set to kick off Monday afternoon, Amazon appears to be having some technical difficulties. For many trying to hit the site for its mid-summer sales day, the site instead served up error messages.

According to several websites, including Outage.Report and Down Detector, people began reporting issues with Amazon just before 2pm CT. Some report that while the site is up, content is unavailable; other times search works properly only intermittently. For others still, they are able to tap “Shop All Deals” for Prime Day but then seem to be stuck in a loop, ending up back on the same Prime Day page when they tap a link.

Some people browsing the Amazon app are seeing an array of sit down pages featuring dogs of Amazon. If Amazon has to be down, at least it’s got good taste in replacement scenery.

Amazon is down for me, but at least I got to meet all the employee's dogs pic.twitter.com/9wKJ62J1tl

The timing of the outage has some smelling a conspiracy theory, suggesting it might be a publicity stunt.

Amazon being down on Prime Day is simply a publicity stunt, right? I mean, we're all talking about it.

If it is a publicity stunt, it does seem to be working. However, it’s more likely that something went wrong during Amazon’s switch from its normal site to Prime Day operations. And given site visitors aren’t able to make purchases during this outage, while it may be drawing eyes and attention to Prime Day, it’s not raking in any money for the company. And isn’t that, ultimately, what Prime Day is all about?

As of roughly 3pm CT, it appears the problem may have been fixed. Links are now loading to their correct destination, albeit slowly. However, if you’re still experiencing issues, TechCrunch discovered a workaround. (I mean, you don’t want to miss out on those deals, do you?) Try heading to smile.amazon.com instead—things should load normally, and your shopping can resume with a portion of your purchases going to charity, too.