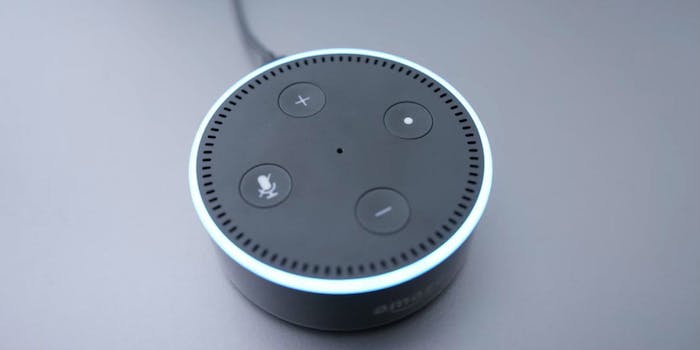 This blood-curdling chuckle will haunt your dreams.

Amazon’s robot speakers are one of the most successful new gadgets of the past decade, bringing Alexa to millions of homes around the world. While convenient, there’s something inherently unnerving about people filling their living spaces with AI-powered speakers that listen to their every word. It’s a setup that sounds like the plot to a Black Mirror episode, one where the robots come out on top. A report published on Monday by BuzzFeed News suggests that may not be far from reality.

People are reporting unprovoked laughing coming from their Alexa-enabled Echo speakers, the sort of blood-curdling chuckle that haunts your every dream. The terrifying noises have some users predicting the start of the singularity, the inevitable AI takeover, which, of course, would start with robots laughing at how naive humans are. In all seriousness, this strange behavior appears to be affecting a not-so-insignificant number of users, and no one knows why.

One Echo owner said on Twitter that their Alexa “creepy” laughed out of nowhere while they were tuned into the 2018 Winter Olympics. Another posted a brief video of its childish chuckling.

So Alexa decided to laugh randomly while I was in the kitchen. Freaked @SnootyJuicer and I out. I thought a kid was laughing behind me. pic.twitter.com/6dblzkiQHp

Most concerning is that no one can pinpoint what exactly is provoking the speaker to make these sounds.

Lying in bed about to fall asleep when Alexa on my Amazon Echo Dot lets out a very loud and creepy laugh… there’s a good chance I get murdered tonight.

Twitter user David Woodland said he was having a chat about confidential information when his Alexa-enabled speaker laughed. He says it didn’t make the chime noise that typically signals when it’s activated. When he asked the speaker why it laughed, it said it wasn’t sure, suggesting it’s well aware of the undesired outburst.

A number of folks on the Amazon Echo subreddit have also run into the same problem. User ema_chad opened the discussion, explaining how their Echo Dot played an audio clip of a woman laughing. Interestingly, they say it’s not the normal laugh Alexa produces when you ask her to.

Even one of the newest speakers, the second-generation Echo, is in on the act.

It’s not clear what’s causing the random outbursts, though it’s not unusual for a smart speaker to incorrectly identify certain sounds. For example, the Alexa may be misinterpreting noises coming from a nearby television. But that doesn’t explain why the speaker doesn’t make a startup noise. It’s more likely that a rogue third-party app is running in the background and purposely creeping people out. There’s also the possibility that these devices are infected with malware.

Who knows, maybe Elon Musk and Stephen Hawking were right, and the robots are laughing at our imminent demise.

Amazon did not respond to our request for comment.

Update 10:09am CT, May 8: Amazon said in a statement that it’s aware of the issue and on rare occasion, Echo speakers can mistakenly hear “Alexa, laugh.” Basically, the speaker is hard of hearing.

The company intends to fix the problem by changing the wake phrase to a less-demanding “Alexa, can you laugh?” which it claims will result in less false positives.

To make things less creepy, Alexa will now indicate when it’s activated by the phrase.

“We are also changing Alexa’s response from simply laughter to ‘Sure, I can laugh,’ followed by laughter,” an Amazon spokesperson told Bloomberg.