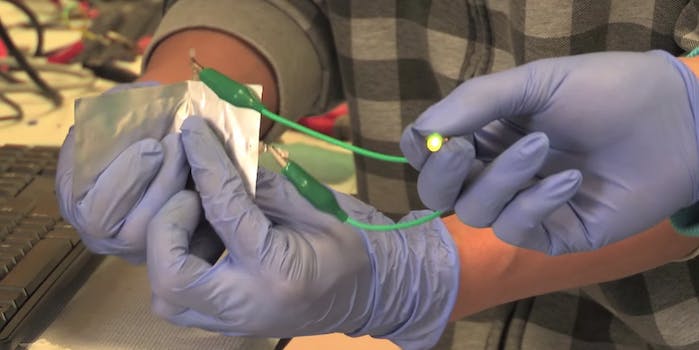 Will the 1-minute charging aluminum battery solve our power woes?

Considering how advanced our gadgets are these days, it’s mind-boggling that battery technology hasn’t caught up. But scientists at Stanford University think they’ve found a way to give us better batteries that can fully charge in one minute.

Hongjie Dai, a chemistry professor at Stanford, told Stanford News that the battery could replace existing batteries like alkaline and lithium batteries currently used in our devices.

For 30 years, scientists have been trying to figure out how aluminum could be used in batteries because it’s cheaper than other materials that power our gadgets, and has a very low risk of flammability, unlike lithium batteries. Until now, no one has figured out how to make a rechargeable aluminum battery for consumers.

Dai said that the team realized that by using a different material for the cathode (or the positively-charged electrode through which the current passes through the battery paired with the aluminum anode) it’s possible to create a rechargeable aluminum-ion battery.

“We accidentally discovered that a simple solution is to use graphite, which is basically carbon,” Dai told the college publication. “In our study, we identified a few types of graphite material that give us very good performance.”

In a video describing the battery, researchers demonstrated how the cheap aluminum and graphite materials can bend, which could be used in malleable phones of the future, and produced five volts of energy with two aluminum batteries, enough to charge a smartphone in one minute.

This technology is still in the early stages of development, but once it goes mainstream, aluminum batteries could be inexpensive and safer alternatives to batteries we have now, as well as storage devices for renewable energy in homes and businesses.

The findings were published in Nature.