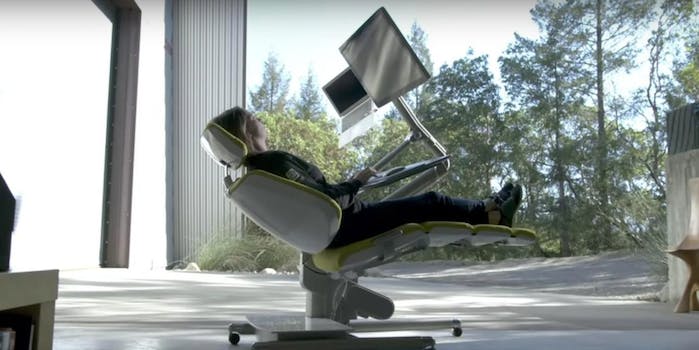 This $5,900 desk lets you lie down while working

Lying down to get more done.

Turns out lying down on the job might not be such a bad thing if you do it with this startup’s pricey desk.

Take a standing desk, rotate it 90 degrees, and you’ll have the Altwork Station, a work desk that allows the user to lie in a completely horizontal position.

The Altwork Station is marketed toward any person who spends the majority of their day at a computer: writers, designers, programmers, etc. Its flexible build allows it to be set up in four different positions that range from the familiar desk you’d find in most offices to the modern, standing-desk alternative.

But the configuration referred to as “Focus mode” is the most interesting, as it puts the user on their back.

The entire workstation shifts around them, with the computer monitor hanging over their head and the desk running perpendicular to the body. A system of magnets keeps in place the accessories that would otherwise slide right into a person’s lap.

Altwork’s creation isn’t meant to keep its users locked in a reverse planking position; the primary goal is to get people to change how they are seated over the course of the day. The company admits on its website there is “no formal ergonomic data to support the benefits of the reclined position,” but notes, “most experts agree that humans should change positions and move throughout the day.”

Sitting is probably killing us all, and the science is still out on the true benefits of standing desks—the best thing they have going for them is that the user isn’t sitting. It’s not particularly reassuring that the one hope for humanity is basically the same setup humans are constrained to in the dystopian existence depicted in WALL-E, but here we are.

All you’ll need to get yourself the Altwork Station for home office is $5,900—though early adopters can get one for as little as $3,900. Be warned, you’ll have a wait ahead of you; It won’t start shipping until mid-2016.

There are some cheaper alternatives out there, like the adjustable laptop desk from Japanese manufacturer Thanko that sells for about $110, but none with the structural intensity of the Altwork Station.

Or you can just keep sitting. We’re all going to die eventually, anyway, right?