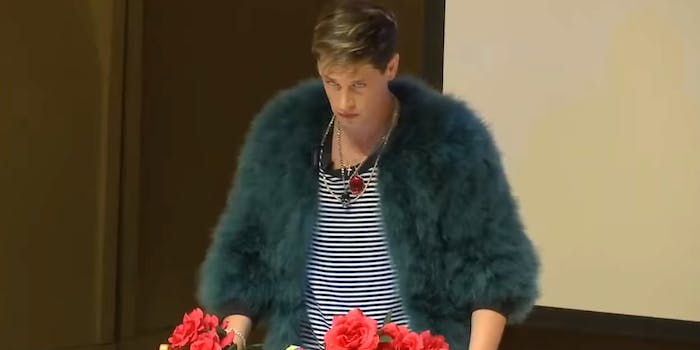 A man was shot and critically injured as protests turned violent on Friday in Seattle over a speech event featuring ‘alt-right’ provocateur Milo Yiannopoulos.

Around 80 police officers in riot gear had been deployed at the University of Washington’s Kane Hall in an attempt to keep crowds of demonstrators apart from the waiting event attendees when the situation escalated.

The alt-right is a patchwork movement regularly associated with white nationalism and online trolling efforts they claim helped propel President Donald Trump into the White House.

Yiannopoulos, a Breitbart News editor who recently landed a $250,000 book deal with publishers Simon & Schuster, had been invited to speak by the university’s Republican club. At around 8:20pm local time he took to the stage at the university venue.

Yiannopoulos: "Donald Trump is president now and there's nothing you can do about it." pic.twitter.com/5becpzm1SX

Outside, however, the scuffles and confrontation continued as groups of Trump supporters faced off against socialists, chanting at one another.

At certain areas within the crowded square, the groups exchanged with one another physically. According to police reports, some were throwing blue paint, fireworks, and bricks.

During the chaos, witnesses described hearing a muffled gunshot. A 34-year-old man had been shot in the abdomen. Footage from the moments following the incident show other protesters carrying him away from the scene and calling for emergency medical assistance.

Inside, as the news spread, Yiannopoulos briefly stepped from the stage during his talk to confirm whether a shooting had, in fact, taken place.

“If we don’t continue, they have won,” he said to cheers and applause from the crowd upon returning to the mic.

As a controversial and outspoken right-wing figure, protests often occur where Yiannopoulos is due to deliver his talks. One recent speech, set for Jan. 13 at the University of California-Davis, was canceled as a result of protest action. Yiannopoulos was not willing to allow that to happen again. The show would go on despite the situation outside.

The victim, who had allegedly been trying to help de-escalate conflict outside the event, was rushed to Harborview Medical Center. He was later identified in a press release as a member of a socialist organization called Industrial Workers of the World. In the statement, the union claims to be an “anti-racist, anti-fascist” organization whose members had turned up to “oppose Milo’s hateful speech.”

The shooter disappeared into the crowd but handed himself into police on the following morning. The gunman claimed to police that he had fired his weapon in self-defense, believing that his would-be victim was a white supremacist intent on hurting him. He was later released without charge.

The Seattle Times reports that the individual claiming responsibility for the shooting had messaged Yiannopoulos on Facebook in the hours ahead of the event. In the message, to which he received no response, he claimed that he had been punched while waiting to be let into the hall. “I got sucker punched (he was a bit limp wristed) and someone jacked my #MAGA hat,” he writes.

The Times noted that the associated Facebook profile indicated the shooter’s support for Trump and the National Rifle Association.

Seattle Police Department declined to comment on the specifics but have made clear that an investigation is ongoing.