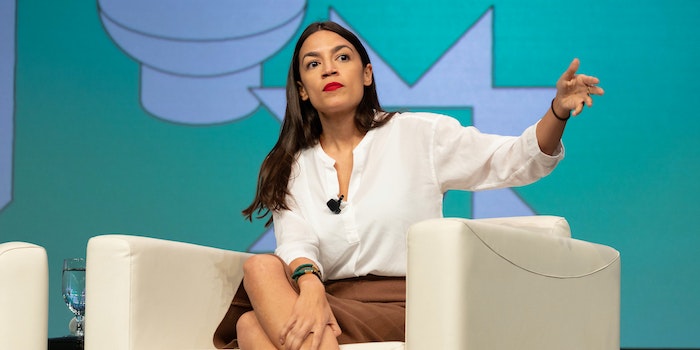 A court ruled that Trump couldn't block critics on Twitter on Tuesday.

Rep. Alexandria Ocasio-Cortez (D-N.Y.) is being sued by two people for blocking them on Twitter, a lawsuit filed in the wake of a court ruling that said President Donald Trump could not block people because it violated his critics’ constitutional rights.

Ocasio-Cortez was sued by former New York Assemblyman Dov Hikind in the United States District Court for the Eastern District of New York on Tuesday. Republican congressional candidate and YouTuber Joey Saladino also said he was suing the New York lawmaker on Tuesday.

The suits came the same day the United States Court of Appeals for the Second Circuit upheld a lower court’s decision that Trump could not block his critics on Twitter.

No one is above the law. If the courts ruled POTUS can’t block people on Twitter, why would @AOC think she can get away with silencing her critics? pic.twitter.com/Ea498kTWEs

I have officially filed my lawsuit against AOC for blocking me on twitter.
Trump is not allowed to block people, will the standards apply equally?
Stay tuned to find out! pic.twitter.com/0RmHI7x9Qc

In his lawsuit, Hikind cites the decision from the Court of Appeals on Tuesday and claims he was blocked by the New York congresswoman on Monday.

“Defendant’s blocking of Mr. Hikind, and others like him, from the @AOC account prevents or impedes the viewing of Defendant’s tweets; from replying to these tweets; from viewing the comment threads associated with these tweets; and from participating in the comment threads,” the suit reads, adding: “As the Second Circuit Court of Appeals declared today ‘if the First Amendment means anything, it means that the best response to disfavored speech on matters of public concern is more speech, not less.'”

The suit seeks for the court to enter an injunction and require Ocasio-Cortez to unblock Hikind.