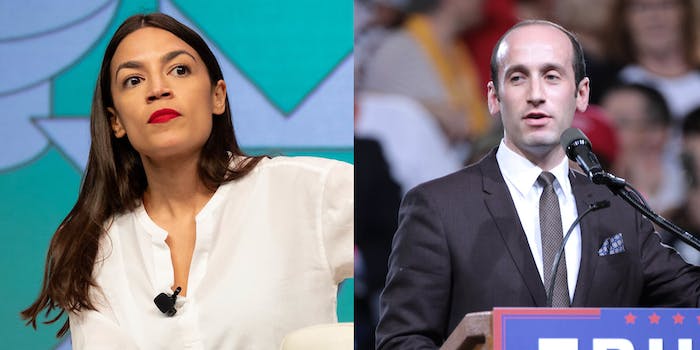 Ocasio-Cortez has been vocal in her calls for Miller to resign.

A petition backed by Rep. Alexandria Ocasio-Cortez (D-N.Y.) calling for White House adviser Stephen Miller to resign in the wake of a cache of his emails being leaked has amassed more than 45,000 signatures as of Monday.

Last week, the Southern Poverty Law Center’s Hatewatch published emails sent by Miller in 2015 and 2016 where he, among other things, shared a link from a white nationalist website. The emails quickly drew condemnation.

The New York lawmaker pushed for Miller’s resignation in the immediate aftermath of the emails being published, saying on Twitter that he was “exposed as a bonafide white nationalist.” She brought attention to a petition hosted on her website the day after the emails were published.

A few days later, Ocasio-Cortez tweeted a link to a new petition—this time at MillerMustGo.com.

“We’re not done with Stephen Miller. He’s a verified White Supremacist controlling US immigration policy, which has now detained over 70,000 migrant children,” Ocasio-Cortez tweeted on Friday. “This is not to be dismissed. People’s lives are at risk. He needs to go now. We’re mobilizing:”

We’re not done with Stephen Miller.

He’s a verified White Supremacist controlling US immigration policy, which has now detained over 70,000 migrant children.

This is not to be dismissed. People’s lives are at risk.

As of Monday afternoon, the petition had 45,224 signatures. The White House did not immediately respond to a request for comment by the Daily Dot about the petition.

Numerous other congresspeople have also called for Miller to resign.