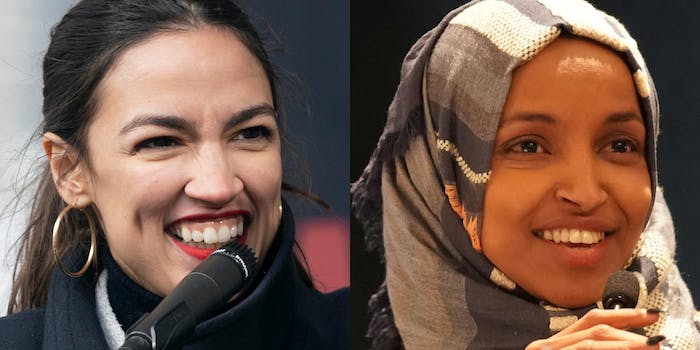 There's a very glaring reason they are ignoring her.

How come no one wants to debate Ilhan Omar?

In recent months, a downright obscene number of white men have challenged Rep. Alexandria Ocasio-Cortez (D-NY) to a debate.

The list spans the ideological spectrum, from far-right pundits like Ben Shapiro to center-left politicians like presidential also-ran John Delaney. While the debate challenges were, in various ways, sexist, racist, and ageist, the vitriol behind them pales in comparison to what Rep. Ilhan Omar (D-Minn.) has dealt with.

Like AOC, Omar is often scolded, derided, and condescended to by male congressional colleagues and pundits. But, unlike Ocasio-Cortez, they aren’t eager to challenge Omar to debates, or even engage in good faith with her ideas. Why do these men want to debate AOC and not Omar?

First, let’s look at what these candidates have in common. Both women are millennials: Ocasio-Cortez is 29, Omar is 37. Both of them are women of color. Both of them are part of a small group of Congress members endorsed by the Democratic Socialists of America, Our Revolution, and the Justice Democrats. Omar and Ocasio-Cortez share a very similar agenda, with a focus on progressive, redistributive policies like the Green New Deal, Medicare for All, and tuition-free college.

But, there are key differences between them that are telling about the state of race, religion, and ideological diversity in America.

It starts with race.. and religion

Again, Ocasio-Cortez and Omar are both women of color. However, Omar is a Somali-American Muslim while Ocasio-Cortez is of Puerto Rican heritage and was raised Catholic. It’s an understatement to say that Latinx people and Muslims are two marginalized groups that are of the targets of xenophobic behavior and bigotry.

However, Islamophobia has seen an incredible rise under Trump and anti-Muslim bigotry has been an undeniable aspect of American life post-9/11.

Between the first and second quarter of 2018, incidents of Islamophobia rose 83% nationwide. One study found a consistent rise in hate crimes against Muslims in America dating back to Trump’s campaign announcement. The Intercept reported that the 2018 midterm cycle was the “most Islamophobic U.S. election ever.”

Whether or not would-be debate challengers are dissuaded from sharing a stage and exchanging ideas with Omar because of conscious Islamophobia is debatable. It’s unlikely that these would-be debate partners—especially on the Democratic side—would be able to articulate this.

But, it is one of the few key differences between two legislators with very similar politics, and bigotry doesn’t have be conscious for it to have an impact. Congress members who practice Islam are technically accepted, and can chose to nod to their religious beliefs by being sworn in on the Quran or wearing a hijab. Some don’t even consider Omar to be a legitimate member of Congress, despite winning an election in the same manner they did.

And there is still a long way to go when it comes to some House and Senate members viewing Muslim lawmakers as allies. And this is true on both sides of the aisle.

Many of Omar and Ocasio-Cortez’s positions are similar, if not identical.

One of the few key differences between Ocasio-Cortez and Omar has been Israel and Palestine. While it isn’t fair to call AOC “pro-Israel,” she has been reticent to vocally support Palestinian liberation and the BDS movement (which calls for boycott, divestment, and sanctions of businesses working with Israeli companies) like Omar.

Ocasio-Cortez’s weak position on Israel has led to conflict with Democratic Socialists of America, a group, which like Omar, is firmly pro-Palestinian liberation. It’s fair to say that Omar feels closer to the issue because she is Muslim, and Palestine is a majority-Muslim country.

It has been Omar’s comments on Israel that have primarily drawn the ire of the right and moderates within the Democratic party. In February, she pointed out that Republicans receive lots of lobbyist money from Israeli interests, tweeting, “It’s all about the Benjamins, baby” in response to Rep. Kevin McCarthy (R-Calif.) criticizing Omar’s views on Israel. This led to bad faith accusations that Omar is anti-Semitic. Subsequently, when Omar has criticized Israel’s influence over American politics, she has been erroneously accused of anti-Semitism.

This feels like a logical place to invite debate, but because allegiance to Israel is the de facto position of the United States and lawmakers, it seems that many in Congress (and the pundit class) feel there is no disputing that her comments are anti-Semitic. They feel this way despite most of the left at home and abroad (including the Jewish left) siding with Omar.

Ocasio-Cortez’s views on Israel and Palestine are more nuanced; she stops short of Omar and Tlaib (who is also Muslim and vocally pro-Palestine). AOC has made statements that cutting aid to Israel “should be on the table.” However, when pressed to commit to BDS, she has been known to plead ignorance or hedge her support.

In Congress, there is still largely bipartisan support of Israel, and it may be Omar’s radical position on this issue, as well as her unequivocally anti-war and anti-imperialist views, that make her perhaps too left-wing to be an attractive debate partner.

The problem of the Democratic party

The policy and identity differences between AOC and Omar have led them to be received differently by Democratic leadership. Ocasio-Cortez is treated like a young upstart who will grow into a leadership role while Omar is characterized as a renegade radical to be shunned.

Yes, Speaker of the House Rep. Nancy Pelosi (D-Calif.) and other moderate Democrats have been critical of Ocasio-Cortez on occasion, but they haven’t gone as far as trying to pass a resolution to silence her. In March, the Democrat-led House overwhelmingly passed a resolution that essentially framed Israel vs. Palestine as “both sides” issue, condemning both “anti-Semitism and “anti-Muslim bigotry.”

If Omar isn’t receiving support for her own party, it makes sense that Republicans wouldn’t both to give her ideas credence and invite debate. So long as her own party treats her poorly, her opponents have no strategic reason to treat her like a peer and to treat her ideas as legitimate.

This targeting of Omar for political theater by her own party came at a time when the freshman congresswomen was being targeted with hundreds of death threats.

There is a clear difference in the way that Pelosi and other moderates speak of Omar and how they talk about AOC. At AIPAC, both Pelosi and Rep. Steny Hoyer (D-Md.) implied that Omar was anti-Semitic. Pelosi also implied whether Omar’s stance on Israel was “legitimate.”

While Pelosi and other centrists are often critical of AOC, they come at her with the tone of someone on their team to be kept in line rather than an ideological enemy.

Democratic leadership can be snide and condescending toward Ocasio-Cortez, sure, but it has the tone of collegial chiding from senior members to an upstart. When they talk about Omar, they act like they are talking about an enemy.

This framing by their own party may lead conservatives to view Ocasio-Cortez as someone to be debated, while they are free to mock and ridicule Omar, as her own party often fails to come to her defense.

Conservatives and centrists want to debate Ocasio-Cortez because she is perceived as the most progressive outlier on the Democratic team. Though she is being “othered” by them, it is an othering that deems her acceptable to the white majority. There is a sense that the right debate partner could set her straight or keep her in line.

While this is demeaning and is clearly sexist, ageist, and racist, Omar is being othered in another, more insidious way. As a pro-Palestinian Muslim, she is being told that she is outside the bounds of acceptable discourse. She is someone to be defeated and ostracized, not debated and coerced.

While both of these women are being treated poorly, this provides a clear example of how bigotry and xenophobia work in America. While AOC is an “other,” the forces of white supremacy and hegemony are willing to accept her into their club so long as it allows them to further exclude groups and perspectives that they find more radical or distasteful.

But, they aren’t quite as disrespectful as the way these people treat Ilhan Omar, who they believe isn’t worthy of debate at all.